An English Bride in Scotland by Lynsay Sands 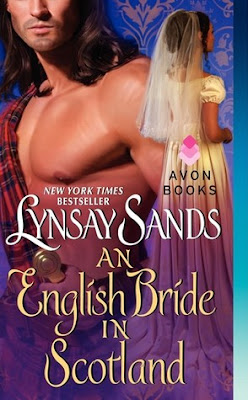 Sexy, funny, exciting... a fantastic start to this series!

An English Bride in Scotland is the first book in Lynsay Sands's new series. Set in the Scottish Highlands, this story delivers all the things we Highlander historical romance fans want in our reading; humor, excitement, passion, love, and hot, hunky, men in kilts. And out of kilts. Especially out of kilts.

Annabel's life was decided for her when, at seven years old, her mother left her at Elstow Abbey where it was expected she would grow to an age then take the veil to become a nun. Things didn't progress as planned, however, because Annabel had problems following the rules. She wanted to be good, she really did, but she just never quite measured up.

Then one day, out of the blue, her mother arrived to take her home, as it turns out, to marry the Scottish Laird her older, runaway sister was betrothed to. Annabel had been raised to be obedient in all things, so she didn't really question this or put up a fuss, but that didn't mean she wasn't concerned. She had no idea how to run a keep or be a wife, but knew she'd have to learn. And in the Abbey she'd heard frightful stories about how painful and distasteful the whole marriage bed bit was, but she decided that'd be something she'd just have to endure.

Laird Ross MacKay wasn't thrilled to be saddled with an English bride, but one look at the shy, lush, Annabel, and all Ross could think about was getting her into bed - even though he knew she wasn't the woman he'd been betrothed to since childhood. Why the Withrams were swapping daughters on him, he couldn't say, but all he wanted to do was claim his sweet, curvy bride and return home to his clan and life with Annabel at his side.

Lynsay Sands is the author of the insanely popular Argeneau Vampire series, but she's also penned some historical romance novels. I've only read two of them, this one included, and I have thoroughly enjoyed them both. Ms. Sands writes heroes and heroines who feel so real, it's easy to forget that they're just characters in a book. They laugh, they cry, they learn, they love, and they often make me do the same.

One of my pet peeves in Highlander HR is when the authors fail to give me enough of that sexy Scottish brogue I love so much! That's not a problem in this book, though, as the dialogs are full of ayes, nays, no', ha'e... Well, you get the idea. I love that! And there's also enough talk of daily life in a Highland castle to keep my feet firmly panted in the past - which is exactly where I want to be while reading.

Lynsay Sands is one very talented writer, and if you're like me and want great characters and entertaining stories, you should definitely give her a try. Whether you're in the mood for hot, hunky vampires, or sexy men of the past, you won't want to miss her stories! I'm very much looking forward to the next in this series!

My thanks to Avon Books for providing me with a copy of this story in exchange for an honest review!

Posted by Blithely Bookish at 4:02 PM