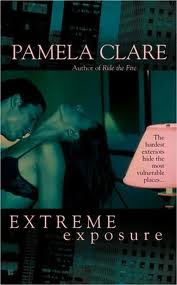 I’ve read Pamela Clare’s MacKinnon’s Rangers Highlander novels, Surrender and Untamed  and loved them both, so when I heard that she had a romantic suspense series, I was pretty sure I’d enjoy them as well, and wow, was I ever right! Now my biggest dilemma is, do I tear through them one after the other, or pace myself?
Extreme Exposure is the first book in the suspense filled I-Team series. The I-Team is the investigative reporting team at the Denver Independent newspaper, made up of Tom Trent - Editor in Chief, Syd Wilson - Managing Editor, and journalists/investigative reporters; Kara MacMillan, Matt Harker, Sophie Alton, Tessa Novak, and Joaquin Ramirez.
Now, most of the romantic suspense books I’ve read are about military, police, firefighters, etc., so I had no idea that a reporter investigating a story could be so exciting – and dangerous. This story focuses on Kara MacMillan and Senator Reece Sheridan and when I bought this book I had no idea that it revolved around a newspaper reporter as the heroine and a good guy politician as the hero. Another something that is different is that in Extreme Exposure it’s the female lead who’s taking risks, making enemies, and living dangerously. That’s not to say that Reece doesn’t have his own fires to put out and enemies to escape, because he most certainly did.
I’ve never really given much thought to what an investigative reporter actually does, so I appreciated the detail and the insight we’re given into what happens on a daily basis with meetings, appointments, interviews, etc., and I also appreciated the way that it was done. Usually, I feel that the first book of a series suffers from what I affectionately call “FITSs” – First  in the Series syndrome – where there’s so much character introduction and world building that we’re lost in page after page of data resulting in information overload. However, Ms. Clare did this in such a way that we were actually inside those meetings, watching what transpired, what needed to be done next and listening to the interactions. I much prefer the authors who show us by allowing us to experience it, rather than tell us what happened after the fact. It keeps things from becoming boring and “lecture-esque.”
Another thing I was glad to see was how Kara juggled her career and her family, namely her son, Connor, a four year old bundle of dynamite. Connor’s father had abandoned them as soon as he learned that Kara was expecting their child, so everything she had to do was done alone, as a single mom. There was nothing glamorous about Kara’s life and she worked her tail off to be the best she could be as both a journalist and a mother. She struggled at times, and her choices were not always easily made.  This is what real life is like for a mom who wants a career and who also wants to raise her child herself, without relying on nannies and babysitters to do it for her. Kara was fortunate enough to have a loving, supportive - albeit quirky - mother, Lily, who was more than willing to step in and help when she wasn’t attending demonstrations and sit-ins sans shirt and bra. Yes, you read that right – topless. And I’ll just toss this in real quick; her mother made for some fun times and interesting relationship story lines.
The glimpse into the life of a Senator, in this case, one Reece Sheridan, was quite enlightening. Maybe if I had paid closer attention in high school civics it wouldn’t have seemed quite as fascinating, nevertheless, it was. Reece didn’t really have any other responsibilities other than his senatorial duties, and it’s a good thing because they took up most of his time. It was educational, but not boring.
Now, Kara and Reece had known each other from press conferences and interviews, that kind of thing. But they happen to meet in a bar one night and Reece was immediately interested while Kara wanted to keep things professional. Well, until she’d had three margaritas and was chatting him up about oral sex which made for a pretty funny scene. I enjoyed the way their relationship progressed. Kara was trying to keep a “safe” distance, and Reece wasn’t giving up, but he wasn’t being all pushy alpha male, either.  In fact, he’d given Kara a ride home from the bar that first night and when, in her tipsy state, she’d rather blatantly propositioned him, his reply was, “Not this time”…”Ask me again when you haven’t had three.”
I really admired the integrity with which they both performed their jobs. While it’s easy to imagine that all politicians are crooks, Reece was not. He had been a high school U.S. Government teacher and had given a very passionate speech to his students about the need for citizens to become involved in government. When his students challenged him to run for Senator, he did and he won. It was important to him to show his students that you in fact could be a politician and be honest at the same time. While he was doing his “time” at the Capital building, he always planned to return to his true love, teaching, knowing that he’d be learning very valuable lessons which he could then use to educate his students in a way text books never could.
I suppose we don’t too often read about crooked journalists, at least I don’t. So it wasn’t too terribly shocking that Kara wanted to do everything by the book. In all her requisitions, in all her dealings and interviews, every “t” was crossed and ever “I” was dotted. There were times when it was annoying as hell when I wanted her to be able to just hurry up and get the bad guy, but she was being true to her profession and her ideals. I couldn’t fault her for that.
There were a few great quotes and scenes, and this was one of my favorites:

Very slight spoiler:
Her labor had been so much easier and faster this time, with the pain overwhelming her only toward the very end. But then her mother and Reece had been there to help her through it, together with the midwife and Reece’s sister Melanie, who’d become a good friend. Holly, Tessa, and Sophie, whose job it had been to entertain Connor during Kara’s active labor, returned at the last minute, just in time to watch the actual birth.
Reece, whose love had sustained her through the last excruciating hour, had been the one to catch Caitlyn. With the guidance of the midwife, he’d eased their daughter from Kara’s body. Then he’d looked up at Kara through eyes filled with tears, a look of amazement on his face. “It’s a girl!”
Kara would never forget that moment for as long as she lived – even if in the next instant she’d overheard Holly tell Tessa and Sophie, “If I ever have a baby, I’m going to have a Brazilian wax first. Keep it pretty, you know?”
“Honey, when you’ve got an eight-pound object coming out of your cooter, the last thing you’re going to care about is how it looks,” had been Tessa’s reply.
End spoiler
Overall, I found this to be a surprisingly well balanced story. There was action and suspense, sex, drama, romance, sex, passion, intrigue, mystery, sex… oh, did I mention there was a lot of sex? And it was hot sex, too - vanilla, but hot. And I don’t feel like it overwhelmed the story.

Posted by Blithely Bookish at 3:25 PM