Only in My Dreams (Ribbon Ridge #1) by Darcy Burke 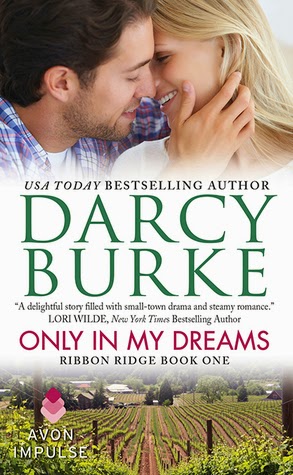 Only In My Dreams is the first full length novel in Darcy Burke’s Ribbon Ridge Contemporary Romance series, but we’re first introduced to the Archer family in the prequel novella, Where the Heart Is. Each of the seven (+1) Archer siblings seem to have their own unique set of health or emotional problems, but it’s the way they come together to support one another than makes this such a touching, entertaining read.

Fed up with her self-imposed single life, successful event planner Sara Archer heads to a bar for a night of dancing … and bumps into Dylan Wescott, the high school crush she hasn’t seen in years. A little harmless flirting leads to a hot, completely uncharacteristic one-night stand; but when she wakes up alone, Sara knows her life is too complicated for a relationship and there can’t be a repeat.

Dylan, a divorced, ex-military construction contractor, limits himself to casual flings—his failed marriage proves he’s better off alone anyway—but he can’t stop dreaming about Sara. And when his firm is hired to oversee the renovation project run by the Archer siblings, Dylan and Sara are unable to resist their explosive chemistry.

But when their secret affair grows beyond “friends with benefits” and neither is willing to admit they want more, family drama and emotional scars may ruin their chance at a love they believed was only in their dreams.

I've never read a story quite like this one, and I really enjoyed it. The heroine suffers from Sensory Processing Disorder, which some say is a form of autism. The story is...sad...in some ways, but also very uplifting. It was great to see a heroine who is so grounded, so strong, so able to cope with a disorder that could be debilitating. Fortunately, she has a family who believed in giving her the tools she needed to learn to live with SPD and not let it control her life.

Dylan’s family life was the exact opposite of Sara’s - empty, without love, and he would rather live his life alone than be in a relationship – of any kind. He’s pretty bitter about the way his childhood went, and then his marriage fell apart and though I’m not exactly sure why, I’m pretty sure it was his fault. No cheating or anything like that, but I get the impression he was just as disconnected emotionally from his wife as he was from his family.

Sara and Dylan’s relationship begins with a one-night stand, but as often happens, one night just isn’t enough. I did *snicker* at their attempts to keep things simple, but at some point got tired of it too, because, in my opinion, it caused the story to drag a bit.

Minor spoiler: One thing that really disappointed me was how we learn about Alex’s suicide. In the prequel (Where the Heart Is) he was fine; quite sick of course, but we got to know and care about him. As Only in My Dreams begins, we find that Alex killed himself (just 2 weeks prior) and left a legacy of sorts for his siblings to fulfill. No one really knows why he took his own life, other than being so sick and probably not wanting to burden his family. I do believe that slowly but surely this part of the story will unfold, and we'll get our answers.

Ribbon Ridge is a small town full of people with big hearts. The Archer family is struggling to move on after their tragic loss, and watching them come to grips with their heartbreak and unanswered questions leaves no doubt that the series will continue to draw me in and become a favorite!

An ARC was provided by Avon Books and in appreciation I’m giving them an honest review.

Sensory processing disorder is a condition in which the brain has trouble receiving and responding to information that comes in through the senses.

The condition used to be called sensory integration dysfunction.

Some people with sensory processing disorder are oversensitive to things in their environment. Common sounds may be painful or overwhelming. The light touch of a shirt may chafe the skin.

Others with sensory processing disorder may:

Sensory processing disorder is not recognized as a standalone disorder. But many experts think that should change.