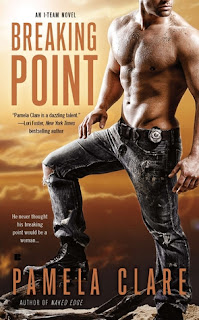 While investigating border violence in Ciudad Juárez, Mexico, Denver journalist Natalie Benoit is caught in a bloody ambush and taken captive. Alone in the hands of ruthless killers, she will need every ounce of courage she possesses to survive.

Betrayed by another operative, Deputy U.S. Marshal Zach McBride has endured a week of torture and interrogation at the hands of a bloodthirsty Mexican drug cartel. Ready to give his life if he must, he remains unbroken—until he hears the cries of an American woman.

Although Natalie is only a voice in the darkness of their shared prison, her plight brings renewed strength to Zach's battered body. With her help, he overpowers their captors, and they flee through the desert toward the border, the attraction between them flaring hotter than the Sonoran sun.

But past loss and tragedy leave both of them reluctant to follow their hearts, even when the passion between them reaches its breaking point. Faced with feelings neither expected, they fight to stay ahead of the danger that hunts them as forces more powerful than they can imagine conspire to destroy them both…

Congratulations to Pamela Clare! Breaking Point was named one of amazon.com's Top Ten Romances of 2011!

Books like Breaking Point are the reason Pamela Clare is my favorite Romantic Suspense author. Yes, I know I sound like a broken record, but it’s true, and this latest installment of the I-Team series only further solidifies her place of honor in this genre. The story is action packed from the first page to the last and once again I was kept on the edge of my seat wondering what was going to happen next, and once that was revealed, how they’d ever be able to get out of it. And when I say my heart was pounding and my hands trembling while reading this story, I’m not exaggerating.

I won’t go into the plot, other than to say that the dedication gives us more insight into the depth of Breaking Point than the cover blurb ever could:

This book is dedicated to the memory of the hundreds of murdered and missing women of Ciudad Juárez, Mexico. You were brutalized and discarded like you didn’t matter. But the earth received your tears, your blood, your bones, and, like a bereaved mother, the earth itself cries out for justice. May the violence end and those who stole your bodies and your lives be held to account.

With all of Pamela’s novels we are given stories we can believe in, causes we can champion, and if Breaking Point is any different at all, it’s only in that the underlying truth the story is founded on is so heartbreaking. And while it’s true that there are hundreds of missing and murdered women whose names we’ll never know, we know of them, and they live on through Pamela’s writing. They are not forgotten.

Now, as those of us I-Team fangirls know, this wouldn’t be a Pamela Clare novel without a gorgeous, passionate, hotter-than-hell hero and Zach MacBride fits that bill perfectly, giving us plenty of burn-up-the-pages sexy goodness! Both he and Natalie Benoit are incredibly strong people, inside and out, and they had to be in order to survive the physical and emotional hell they’re put through in this book.

While Breaking Point has one of the most intense, exciting endings I’ve ever read in a romantic suspense novel, it is also filled with memorable and heartwarming moments. One of my favorites from this book also takes place towards the end when we get a candid, touching glimpse into the depth of the friendship formed between Marc and Julian, a couple of I-Team heroes from previous books. It honestly brought tears to my eyes.

If you haven’t yet read this series, you’re seriously missing out on some incredible stories. They’ll enlighten you, entertain you, make you laugh, sigh and fan yourself, and they might even move you to tears, but most importantly, you’ll finish the book knowing that what you read was well worth your time. And who knows, you might even be inspired to take a look around and see what you can do, no matter how small it might seem, to make someone’s life a little better. To make a difference.

Posted by Blithely Bookish at 11:20 AM