When Beauty Tamed the Beast by Eloisa James 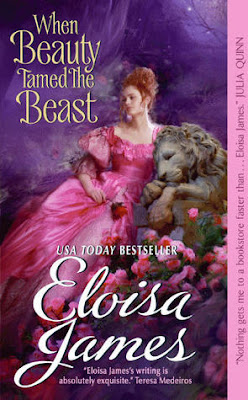 Just what the doctor ordered!

I’m a big fan of historical romance novels, but admittedly the genre can become a bit tedious due to storylines and characters who are confined to the particular roles and behaviors of their era. I’ve read just about every kind of historical romance, from those of the light and fluffy variety to those that leave my emotions in a tattered mess. Well, I’m happy to say that When Beauty Tamed the Beast struck a perfect balance of both, and was an absolute pleasure to read. It wasn’t an angsty story at all, and I found myself constantly smiling and frequently even laughing out loud at their ridiculous banter. The dialog throughout the book was priceless with such sarcasm and dry humor that I just couldn’t wait for the next confrontation to take place. And while it was a very funny read, my heart ached for both Piers and Linnet and the internal battles they both fought.

At first, I couldn’t put my finger on what it was that was so appealing about our hero, Piers Yelverton, Earl of Marchant. He’s a gruff, offensive, belligerent doctor whose bedside manner could leave one contemplating the upside of death. Add to this that he’s not known for being stunningly handsome and I have to ask myself why I was so drawn to him. His no nonsense approach at telling patients they were going to die seemed so callous, and yet, oddly funny. There was something vaguely familiar about him, but I just couldn’t quite decide what that was. Then one of my Goodreads friends asked me if I recognized the similarities between Piers and Dr. Gregory House of the popular television show, House, who I happen to adore. Of course! Why didn’t I recognize it? Maybe it was because I haven’t watched the last couple seasons of the show because Dr. House, as a character, seemed to move away from the man I had come to adore in the earlier seasons. Piers, on the other hand, is exactly what had me falling in love with Gregory House in the first place.

Miss Linnet Berry Thrynne is a beauty who hasn’t been ruined by it. It’s odd, because she knows she’s beautiful because everyone says she is, but it doesn’t seem to matter much to her. Well, not until she faces the possibility of losing her looks. I really enjoyed her as a heroine, and she’s the perfect match for Piers, who needs someone he can’t trample with his cutting words and offensive manners. She’s strong, independent, and every bit as smart as Dr. House’s counterpart, Dr. Lisa Cuddy. Yes indeed, Piers and Linnet are a perfect match!

Now, before you get all offended that Ms. James might try to secretly copy this popular television show, there’s something you need to know; she didn’t do it secretly at all. There’s an author’s note at the end of the book in which she comes right out and states that the character, Dr. Gregory House and the Princeton-Plainsboro Teaching Hospital greatly influenced her story. But all that said, Ms. James did an incredible job of making Piers unique. In fact, maybe he really did exist and Dr. House developed his technique based on Piers’ work! ;)

When Beauty Tamed the Beast is a great second installment to the fairy tale inspired Happily Ever Afters series, and yes, was just what the doctor ordered! It was fresh, passionate, funny, sexy as all get-out and an absolute delight to read!