Lost in You by Lauren Dane 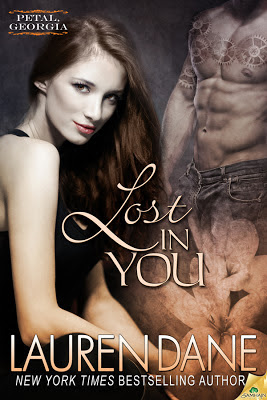 He’s faced down every demon…except one fast-talking Southern girl.

It hasn’t been easy for Joe Harris to live down his not-so-honorable past, but the military made him a better man. He’s determined to make up for past mistakes, starting with coming home to care for his ailing father.

When Beth Murphy hears Joe is back in town, she makes sure she’s the first on his welcoming committee. Though he tries to pretend he’s gruff and unworthy of her, she sees the man who spoils his dog, who touches her like she’s precious. Cherished. But there’s one wall she can’t break down—the truth about what’s happening at home.

On the night the nature of his father’s illness becomes painfully, publicly apparent, Joe does the right thing—push Beth as far away as possible. But if he thought she’d go away quietly, he’s about to learn she’s made of sterner stuff.

Lost in You is a story about loving unconditionally. It’s about acceptance, forgiveness, compassion, and family. About opening yourself up and letting the people who love you help you, to lift your spirits and help carry your burdens. I laughed at Beth’s blatant flirting and no holds barred quest to work her way into Joe’s heart. She never gave up hope, and never stopped trying, because he was already in her heart, and she wasn't about to let him out without a fight. Joe’s story, his father’s story… just heartbreaking, but so, so inspiring, too. There were moments I wanted to smack our hero and heroine, but no matter. Their actions were, for the most part, understandable and in keeping with their circumstances.

Since this is a spin-off of the Chase Brothers series, we do get to revisit them and their families, and while I haven’t yet read those books, I wasn't confused and didn't feel like I was missing anything - well, other than some fantastic stories. But that's okay, because I will definitely be reading those now.

The bottom line: What more can I say than I’ve already said? Not much, really, except that I was totally sucked in, completely invested in the story and the people, and can’t wait to get back to Petal, Georgia again, soon!

Many thanks to Samhain Publishing for providing me with a copy of this book in return for an honest review. It was a pleasure!
Posted by Blithely Bookish at 1:30 AM