Beyond Control by Kit Rocha 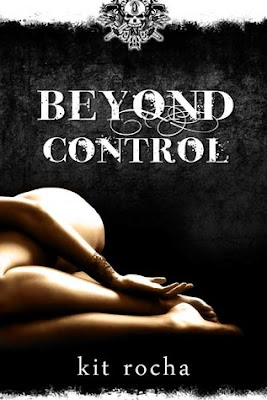 She refuses to be owned.

Alexa Parrino escaped a life of servitude and survived danger on the streets to become one of the most trusted, influential people in Sector Four, where the O’Kanes rule with a hedonistic but iron fist. Lex has been at the top for years, and there’s almost nothing she wouldn’t do for the gang…and for its leader. Lie, steal, kill—but she bows to no one, not even Dallas O’Kane.

He’ll settle for nothing less.

Dallas fought long and hard to carve a slice of order out of the chaos of the sectors. Dangers both large and small threaten his people, but it’s nothing he can’t handle. His liquor business is flourishing, and new opportunities fuel his ambition. Lex could help him expand his empire, something he wants almost as much as he wants her. And no one says no to the king of Sector Four.

Falling into bed is easy, but their sexual games are anything but casual. Attraction quickly turns to obsession, and their careful dance of heady dominance and sweet submission uncovers a need so deep, so strong, it could crush them both.

*****
Beyond Control is the second book in Kit Rocha’s Beyond series, and just like the first book, one helluva read. This is Dallas and Lex’s story, and if you read the first book, Beyond Shame, you know their relationship is complicated, to say the least. Again, the dystopian society is incredibly complex, with the politics of The Sectors taking a front row seat in this installment. My feelings about this book are even stronger than they were about Beyond Shame, in that I find myself even more invested in, and protective of, Sector Four. The people are like a family made up of society’s castoffs, coming together by necessity, but staying together out of love and respect. The entire Post-Flare world is complex and intriguing, but there's something about Sector Four that makes it one of the most amazing worlds I’ve ever read about.

The dynamic between Lex and Dallas is intense, and they have a sexual chemistry that's off the charts. Their passion burns incredibly deep, and even when they aren't having sex, they burn up the pages. Lex is most definitely the perfect Queen for Dallas, the King of Sector Four.

Despite how hard this book pushed some of my sexual comfort zones - even more than Beyond Shame, I can’t wait to read more of this series!

My thanks to Kit Rocha and Netgalley for providing me with a copy of this amazing story in exchange for an honest review.
Posted by Blithely Bookish at 8:28 AM