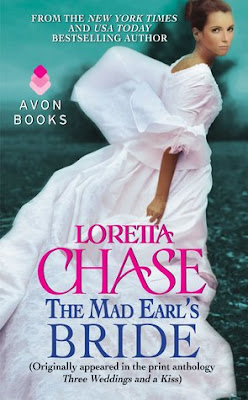 The Mad Earl’s Bride is such a treat! Funny, heartbreaking, sexy, inspiring… this novella delivers it all, and is an absolute delight to read.

Dorian, the Earl of Rawnsley, knows he’s dying, and he also knows he’s going insane. His own mother suffered from the same headaches that have begun plaguing him, and she had to be institutionalized just before dying a tragic, painful death. Dorian hasn’t yet begun experiencing the hallucinations that his mother had, but he knows it’s only a matter of time, and he wants to meet his end peacefully and privately.

Much to his consternation, however, his relatives have other ideas.

Gwendolyn Adams is a nurse, and good one at that. And with her family’s reputation for producing hearty, healthy male children, she’s not surprised when the dying Earl of Rawnsley’s relatives ask her to marry the poor man in order to provide him with an heir. She knows life with a lunatic won’t be easy, but that doesn’t scare her off. Gwen’s a woman with a mission and will let nothing stand in the way of seeing her dream come true.

Loretta Chase is such a gifted author! There’s just something in the way she tells a story that draws readers in and keeps us coming back for more. She knows how to get right to the heart and soul of her characters and make them more than just words on the page. They are people we connect with, people we feel for, and people we love.

This story was originally published in the Three Weddings and a Kiss anthology in 1995, and while it might be short on pages, it’s not short on feeling. Do I wish we had been able to spend more time with Dorian and Gwen, and even cousin Bertie? Absolutely! But for me, this story lacked nothing.

What more can I say than The Mad Earl’s Bride is such a beautiful love story. And the icing on this already delectable little cake? Spending a few minutes with Sebastian Ballister, the notorious Marquess of Dain from Lord of Scoundrels.

My thanks to Avon Books for providing me with a copy of this story in exchange for an honest review.

Posted by Blithely Bookish at 8:33 AM