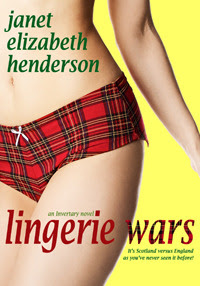 A great start to what promises to be an awesome series!

Kirsty Campbell is struggling to find her way in life after a car accident brings her career as a lingerie model to an end. She’s returned to her hometown of Invertary, Scotland, and is trying to get her lingerie sales business up and running. It’s a slow go, though, mostly because Kirsty won’t put herself out there. She doesn’t want to talk about the accident, the disfiguring scars, or how her ex-fiancé didn’t even visit her at the hospital – and worse – ran off with all her money! Nope, Kirsty wants to lay low and try to enjoy a quiet, uncomplicated life in this small Highland town.

Englishman Lake Benson isn’t thrilled with having to travel to Invertary to check up on his sister, Rainne, whom he loaned his life savings to so she could buy a “knickers” shop. He’d hoped fronting her the money would help her get out from under their parents’ control, but Rainne is going through the cash fast, and he needs to find out what's happening. Turns out the store his sister bought came with a “clause” he’d known nothing about – a feisty 86 year old woman who insists on having final say in everything, and Betty’s final say is that sexy lingerie isn't going to be sold in her store. To further complicate matters, Lake learns that his store (yes, he's decided that since it was his money that bought it, it’s his ) has some serious competition in the form of a real lingerie shop run by the gorgeous ex-model, Kirsty Campbell. Lake needs his shop to be successful so he can sell it and use the money to go into the Security business with an old Army buddy, and this is just one more complication standing in the way of him getting what he wants. So what’s an ex-Special Forces guy to do? Declare war! A lingerie war!

I love this story! The premise, the hero and heroine, the town, the supporting cast, the writing, the … well ... everything! The romance between Lake and Kirsty is slow to grow, but the sexual chemistry is there and that makes for some yummy reading. Even the secondary romance between Rainne and Alistair is fun to read, and I hope they get a happily ever after too. And seriously, Betty is a hoot! The story is humorous enough as it is, but she really kicks the laughs into high gear. I want to be just like Betty when I grow up!

Without a doubt I’ll be reading more by Ms. Henderson, a very talented author!

My thanks to the Independent Book Publishers Association (IBPA) and Netgalley for providing me with a copy of this story in exchange for an honest review.

Posted by Blithely Bookish at 10:47 PM