Dare to Love by Carly Phillips 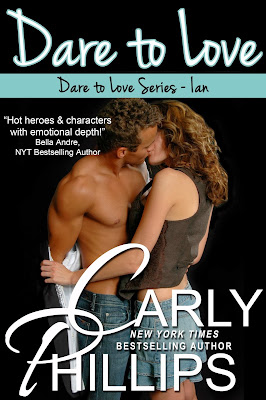 The Cover Blurb
Since finding out his father had another family on the side, Ian Dare swore to be the upstanding, responsible man his cheating parent had never been. When it comes to his relatives, he gives his all but in relationships he offers the bare minimum. But one glimpse of sensual Riley Taylor arouses his dominant and protective instincts and Ian is entranced. He will do anything to possess her … and does. But any future with Riley must include him extending an olive branch to the half-brother who is a constant reminder of the pain he’d rather forget.
Independent and always in control, Riley Taylor makes no apologies for choosing men carefully. Relationships have never been a priority and she believes herself hardened to domineering men – until she meets charismatic Ian Dare. He manages to turn a simple kiss into an all out assault on her senses and when he takes control in the bedroom, she’s stunned to discover she likes it. As their affair heats up, they soon realize they complete each other in ways neither imagined. But Riley’s past is closer than she cares to remember, and her struggles with Ian’s dominance might just cost her everything.

Dare to Love is the first book in Carly Phillips’ Dare to Love series, and it’s also her first book as an Indie author. I haven’t read any of her work before, so I have no way to know if she's better as an IA, but I have to say, I truly enjoyed her way of telling this story!

Wow, well… I have to say, I found this storyline very compelling. In the beginning, my feelings for Ian were mixed – hated him one minute, loved him the next, type thing. I had a tough time imagining what it was like for him to learn that his father, his role model, the man he loved and wanted to be like, had another family on the side. And worse, when that family came to light, Robert Dare chose them over Ian’s mother and siblings. Honestly, when I was finally able to wrap my head around that, I wanted to weep. No wonder Ian is so controlling. No wonder he holds himself back and doesn’t get involved in “relationships” that might lead to him being abandoned by someone else he loves. No wonder he hates his step siblings and wants nothing to do with them. No. Freaking. Wonder. If I were Ian, I'd have hated them, too! But one uttered word brought it all into perspective - and no! I won't tell you what that word is, but it tore out my heart and made me love both sets of Dare children, equally.

Riley Taylor had Ian’s absolute attention from the moment he first laid eyes on her, and it had nothing to do with the fact that she had entered the room on the arm of Ian’s step brother, Alex Dare – okay, maybe that had something to do with it. Knowing Ian's and Alex's history, their deeply rooted, consuming animosity for one another, I was worried that there’d be a lot of angst and drama, but thanks to Riley’s compassion and maturity, thankfully there was not. And I loved her for that. Seriously, had there been, it could have easily ruined the story for me, but this was handled by Riley early on, and handled well.

I’ve been wavering between 4 and 5 stars, and as I’m sitting here thinking about it, I’ve decided to go with 4 because there was something huge left unresolved, in my opinion, and it was Ian's father, Robert Dare’s remorse for what he’d done, or lack thereof. Granted, years had passed and he was probably tired of the rift his cheating ways had caused between his two sets of children, but SON-OF-A-BITCH! I have personal experience with the heartbreaking aftermath of infidelity, so in order for me to really be okay with the way his ex-wife, current wife, and most of his kids accepted his cheating ass and moved on, I needed some serious on-his-knees groveling. Some truly compelling reason for why he did what he did, and not the kissy-face reason we got. Or hell, just TRUE remorse!!! Sweet baby geebus! You might be wondering if I'm upset! Well, lemme just say that someone needs to meet the old, spineless, limp dick asshole in a dark  alley, remove his balls with a spoon and make him watch while they’re fed to sewer rats. Better yet, spread peanut butter on his balls, while they're still dangling from between his legs, and make him watch while the sewer rats eat them! Now YOU decide how upset I am. Fecking fooker!

Because I've Been Asked

No, this book is really not just like Fifty Shades or its clones. Yes, the two leads are wealthy, but not once was the word "millionaire" or "billionaire" mentioned, and trust me, I did a search! Gotta love ebooks!

Dare to Love is at times funny, at times poignant, and at times very sexy! I’m thrilled to have finally read Carly Phillips writing, and yeah, this was my first read by this talented author, but it most certainly will not be my last! In fact, Alex’s story is up next and you couldn’t keep me from it if you tried!

My thanks to Chasity Jenkins for providing me with a copy of this story in exchange for an honest review! It truly was a pleasure – despite what my outburst indicates.

Posted by Blithely Bookish at 1:52 PM