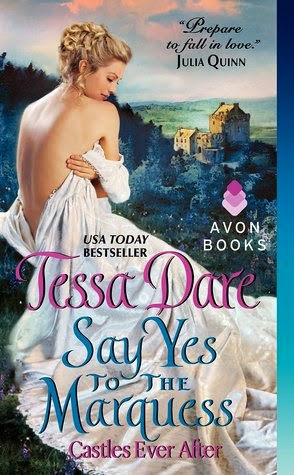 Your presence is requested at romantic Twill Castle for the wedding of Miss Clio Whitmore and . . . and . . . ?
After eight years of waiting for Piers Brandon, the wandering Marquess of Granville, to set a wedding date, Clio Whitmore has had enough. She's inherited a castle, scraped together some pride, and made plans to break her engagement.

Not if Rafe Brandon can help it. A ruthless prizefighter and notorious rake, Rafe is determined that Clio will marry his brother—even if he has to plan the dratted wedding himself.

So how does a hardened fighter cure a reluctant bride's cold feet?


● He starts with flowers. A wedding can't have too many flowers. Or harps. Or cakes.
● He lets her know she'll make a beautiful, desirable bride—and tries not to picture her as his.
● He doesn't kiss her.
● If he kisses her, he definitely doesn't kiss her again.
● When all else fails, he puts her in a stunning gown. And vows not to be nearby when the gown comes off.
● And no matter what—he doesn't fall in disastrous, hopeless love with the one woman he can never call his own.

Tessa Dare's Castles Ever After series is just so much fun! She's given historical romance a refreshing twist while staying true to what we love most about the genre.

Say Yes to the Marquess is the second book in the series, and tells the story of two of society's less...acceptable...peers - Clio Whitmore who has been given the nick name Miss Wait-More thanks to her eight year engagement to Piers Brandon who seems in no hurry to tie the knot, and Rafe Brandon, Piers' black-sheep brother who prefers the title of Champion Pugilist to any he'd carry due to his bloodline.

But eight years have given Clio enough time to realize that she wants more from life than to be the property of a man who doesn't care for her. She wants to be independent, to make her own choices. And if she ever does decide to marry it'll be to someone like Rafe, a man she loves.

Rafe knows he's been a constant disappointment to his family, so when it comes to watching over Clio until his brother returns from his wanderings to claim his bride, he's not going to let anything, not even Clio's decision not to marry Piers, stand in the way of holy matrimony.

There are only a handful of authors who can pen a tale guaranteed to sweep me off my feet, and Tessa Dare is one of them. Rafe and Clio are proof that opposites attract, and attract with a chemistry that burns up the pages. The supporting cast is made up of great characters, but Phoebe, Clio's sister...that is a girl I adore and want to see her find her happily ever after with a man who will love her for all her...quirks.

An eARC of this story was provided by Avon Books via Edelweiss. To show my appreciation I'm giving them an honest review.