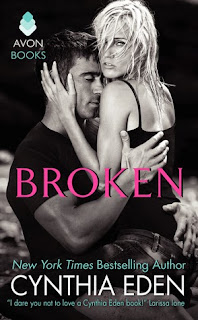 Broken is the first book in Cynthia Eden's romantic suspense series, LOST. It's a thrilling serial-killer murder mystery with so many twists and turns and probable suspects, we can't possibly know, until the very end, who the true killer is. I love stories that keep me guessing like this!

Ex-SEAL and LOST founder Gabe Spencer is accustomed to the unusual in his job. But when knockout Eve Gray steps into his office, he's rattled. For the mysterious woman is a dead ringer for the heiress thought to be the latest prey of the serial killer who goes by the name Lady Killer.

When Eve awoke in an Atlanta hospital, her past was a blank slate. Then she recognized her own face in the newspaper and vowed to learn the truth. Determined to confront the nightmares hidden in her mind, she never expects to find a partner in Gabe.

As Gabe and Eve work together, their explosive attraction becomes irresistible. Gabe knows that his desire for Eve is growing too strong, bordering on a dangerous obsession, but nothing pulls him away from her. And when another Eve lookalike disappears, Gabe vows to protect Eve at all costs. While Eve may have forgotten the killer in her past, it's clear he hasn't forgotten her.

I'm a huge fan of romantic suspense and have read a lot of great stories by some of the genre's best authors but, until now, none by Cynthia Eden - and make no mistake, Broken proves she's one of the best! This story sent chills up and down my spine and even though I didn't want to put it down, I had to put it down because it was getting so intense I knew I'd be up all night checking and re-checking the locks on my doors and windows if I didn't!

Lust at first sight works well in paranormal romance (bonding scents compelling an attraction) and erotica (because erotica is all about sexual attraction), but Broken is neither of those and its intricate, amazing plot didn't mesh with the insta-lust between Gabe and Eve. Sure, Eve's trauma induced amnesia could explain her lack of apprehension over being attracted to Gabe, a complete stranger, but even with that in mind I couldn't get on board with the sexual intensity they felt for each other. Too much, too soon and that cost this story a full star in my rating. Had the attraction/romance moved at a more believable pace, or had this not been meant to be a romance, it would've easily been a 5 star read!

I've already got the next book in the series, Twisted, locked, loaded, and ready to roll... and that should speak volumes about how much I enjoyed Broken!

Posted by Blithely Bookish at 12:44 PM