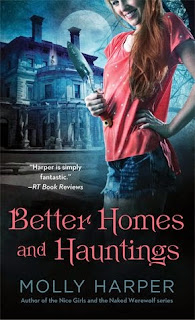 A review of both the audio and kindle version...

Better Homes and Hauntings is a standalone novel by one of my favorite author/narrator teams; Molly Harper and Amanda Ronconi. I often wonder if they share the same brain waves because, without fail, Ms. Ronconi performs the story exactly the way I imagine Ms. Harper meant it to be performed.

When Nina Linden is hired to landscape a private island off the New England coast, she sees it as her chance to rebuild her failing business after being cheated by her unscrupulous ex. She never expects that her new client, software mogul Deacon Whitney, would see more in her than just a talented gardener. Deacon has paid top dollar to the crews he’s hired to renovate the desolate Whitney estate—he had to, because the bumps, thumps, and unexplained sightings of ghostly figures in nineteenth-century dress are driving workers away faster than he can say “Boo.”

But Nina shows no signs of being scared away, even as she experiences some unnerving apparitions herself. And as the two of them work closely together to restore the mansion’s faded glory, Deacon realizes that he’s found someone who doesn’t seem to like his fortune more than himself—while Nina may have finally found the one man she can trust with her bruised and battered heart.

But something on the island doesn’t believe in true love…and if Nina and Deacon can’t figure out how to put these angry spirits to rest, their own love doesn’t stand a ghost of a chance.

I really am a huge fan of Molly Harper’s stories, with the Jane Jamison series being my favorite. Reading the stories is a great experience but nothing beats listening and reading along at the same time as Amanda Ronconi brings it all to life.

Though it took a little while for Better Homes and Hauntings to grab me, I enjoyed the whole book. Because this is a standalone, there was a lot of time spent on character introduction and plot set-up which isn’t necessarily a bad thing considering there are actually 2 romances taking place – 3 if you count the dearly departed couple who are the foundation and driving force behind this story.

If you’re interested in trying her work without investing in a series, Better Homes and Hauntings is a great place to start. It’s an entertaining story with awesome characters and lots of witty dialog. It’s romantic, steamy, funny, and spooky, and I really wish Ms. Harper would write more ‘ghostly’ tales.
Posted by Blithely Bookish at 8:10 PM