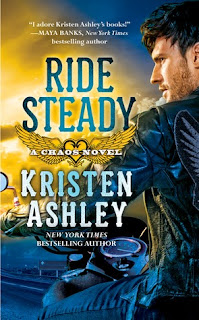 Reading a Kristen Ashley novel - any Kristen Ashley novel - is like spending an afternoon with your best friend, listening as she tells you all about her latest (and greatest) adventure. Regardless of where you're at or what you're doing, it's comfortable, laugh out loud funny, and sometimes even poignant. It's also always guaranteed to be time well spent!

Ride Steady is the 3rd book in the Chaos series, and Joker and Carissa's story is both heartbreaking and beautiful. There were moments I wanted to reach through the pages and kill someone, and moments I wanted to reach through and love them. To say Ride Steady took me on a roller-coaster ride of emotions is to say the least, and I loved every minute of it!

Even though this works as a standalone, it works much better when read in order. And besides, why would anyone deprive themselves of the beauty to be found when bad-ass biker dudes meet their match in the form of a stubborn, independent woman who drives them crazy while bringing them to their knees? So, yeah! Just read them in order!

Once upon a time, Carissa Teodoro believed in happy endings. Money, marriage, motherhood: everything came easy---until she woke up to the ugly truth about her Prince Charming. Now a struggling, single mom and stranded by a flat tire, Carissa's pondering her mistakes when a vaguely familiar knight rides to her rescue on a ton of horsepower.

In high school, Carson Steele was a bad boy loner who put Carissa on a pedestal where she stayed far beyond his reach. Today, he's the hard-bodied biker known only as Joker, and from the way Carissa's acting, it's clear she's falling fast. While catching her is irresistible, knowing what to do with her is a different story. A good girl like Carissa is the least likely fit with the Chaos Motorcycle Club. Too bad holding back is so damned hard. Now, as Joker's secrets are revealed and an outside threat endangers the club, Joker must decide whether to ride steady with Carissa---or ride away forever . . .

An ARC was generously provided by Grand Central Publishers, via Netgalley. To show my appreciation I'm giving them an honest review!

Posted by Blithely Bookish at 6:24 PM