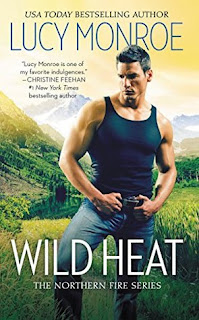 Sometimes old flames are the hottest of all . . .

In the quaint little town of Cailkirn, Alaska, it's impossible to keep a secret, especially one as juicy as the unexpected return of Kitty Grant. Tack MacKinnon remembers her wild red curls and even wilder spirit-and still feels the sting from when she shattered his heart in college. But there's a pain in Kitty's gorgeous eyes that guts him to the core and Tack is determined to do whatever it takes to see the woman he still loves smile again-even if it means taking on her demons as his own.

After fleeing an abusive ex-husband, Kitty decides that the best way to heal her broken heart is to come back home. But she gets a whole new shock when she sees how undeniably sexy Tack has become. More handsome, more muscular, more charming-more everything-he's impossible to resist. Before she knows it, they're reigniting sparks that could set the whole state of Alaska on fire. Yet trust doesn't come easy to Kitty anymore, and as things heat up between her and Tack, she can't help but wonder if one of them is going to get burned . . .


Wild Heat is the first book in Lucy Monroe's very sexy Northern Fire series, set in the small Alaskan peninsula town of Cailkirn, where most of the 2,000-ish residents are Scottish, Inuit, or both.

This story has the many of the elements that often go hand in hand with friends-to-lovers and second-chance romances; misunderstandings, hurt feelings, people growing apart, the struggle to forgive...but that's just a small part of the story. The author also tackled the sensitive subject of eating disorders and did so openly, honestly, and with a level of compassion that was truly moving.

That said, (incoming minor spoilers) I struggled with the idea that Caitlin's family and friends were in a righteous dither over the way her ex manipulated her out of their lives, but then Tack turns around and uses sex to manipulate her into eating. In my opinion, his motivations were only slightly less self serving than her ex's, even if it was done for her benefit. I get it, I do. He cares for her and wants to help her get better, but addressing the underlying cause of a person's eating disorder can be difficult, and Tack's approach did nothing to endear him to me. (spoiling over)

Wild Heat starts out intriguing as, bit by bit, Caitlin Grant's and Taqukaq "Tack" MacKinnon's stories unfold. By about the half-way mark, I have to admit, it felt sluggish and I found myself skimming a bit. But then it picked back up again and left me with a smile on my face and looking forward to the next book, Hot Night, Rock Jepsom's story.

Purchase at Amazon
Posted by Blithely Bookish at 8:47 AM