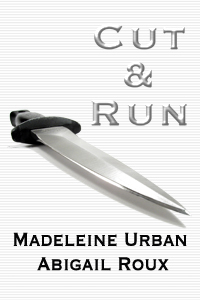 Cut & Run is the first book in the Cut & Run series and I was totally blown away! I’d never read anything by authors Madeleine Urban and Abigail Roux so wasn’t entirely sure what to expect, but seriously… this one grabbed me from the first page and never let go. Cut & Run has turned out to be one of the best Romantic Suspense books I’ve read this year, and has become one of my favorite M/M romances, too.

FBI Agents Ty Grady and Zane Garrett couldn’t be more different - total opposites, in fact, so when they’re ordered to partner up to hunt down a vicious serial killer terrorizing New York City, things do not go smoothly. It’s a dirty case and getting dirtier by the minute when it becomes apparent that the killer is probably someone within the Bureau. Both men just want to get the job done, and it’s about more than catching a killer; they can barely stand being in the same room together and want this partnership over. But when things take a turn for the worse and they find themselves targets, they have no choice but to cut the crap and work together so they don’t end up dead.

This book had it all – great story, amazing characters, steamy love scenes and an honest, believable romance! Ty and Zane’s witty banter and, often times, pain-in-the-ass behaviors had me both laughing out loud and wanting to strangle them! They were sometimes warm and caring and other times bullish and obnoxious, but in the end, I fell hard for both men and can’t wait to read the next book in the series!

Cut & Run was provided by netgalley.com in behalf of Dreamspinner Press. This had no influence on my rating or review.
Posted by Blithely Bookish at 9:59 AM