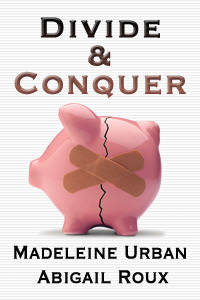 Divide & Conquer is the fourth book in the exciting M/M Romantic Suspense series, Cut & Run, and yes, we have another winner!

In this installment, FBI Special Agents Ty Grady and Zane Garrett are back in Baltimore dealing with riots, robbery and anarchists. It’s a volatile situation - to say the least, and it just keeps getting worse. Despite the Bureau’s attempts to bring law and order back to the city, chaos rules. And as if that weren’t bad enough, our beloved heroes find themselves the targets of a self-important madman who has little regard for human life - especially theirs.

I don’t often find myself so attached to the characters in a book, but there’s just something about Ty and Zane that I can't resist. Somewhere along the way they stopped being merely inked words on the page and became living, breathing people. Are they flawed? Oh, yeah, but those flaws only make them that much more endearing. And despite their stubborn, hurtful and sometimes clueless words and actions, there’s this easy, comfortable dynamic to their relationship – when they’re not beating the crap out of each other, that is – and that’s what keeps me coming back for more. Well, that and moments like this:


Several heartbeats of quiet passed before Zane spoke. “First time I saw you, after I got over hating you, I knew,” he said, echoing Ty's words, “I knew I'd fall in love with you.”

Ty shivered all over, torn between the comforting warmth of Zane's words and the cold terror of impending crush injuries. He couldn't get in any air to speak.

“I laughed at myself,” Zane continued, a hint of pleading in his voice, “and then I denied it, and then I did everything I could to prove myself wrong, but it didn't work.”

“I know, Zane,” Ty whispered, though he had to admit the words brought a certain level of relief he hadn't realized he'd needed.

“Ty.” Zane's even, soothing tones finally broke on the short gasp of his name. “I love you and I'm scared I'll lose you. Please don't leave me alone in the dark.”

With their hilarious banter one minute and these moments of heartbreaking vulnerability the next, these men have positively captured my heart. I laugh with them, cheer for them, and even shed a few tears - but most importantly, I am head over heels in love with Ty and Zane.

And I've been giving a lot of thought to the cover image, and while it, minus the band-aids, comes directly from one of the scenes, it also speaks volumes about Zane and Ty's relationship. The two halves might be together, but they're barely together. We've all heard the saying about putting a band-aid on the wound when major surgery is needed? That describes their relationship perfectly, especially in this book. Terrific cover choice!

The bottom line - Divide & Conquer, like the previous books in the series, has everything I look for in Romantic Suspense – a great storyline, amazing characters, burn-up-the-pages love scenes and a heartwarming, believable romance! I don’t know how they do it, but Madeleine Urban and Abigail Roux consistently bring all kinds of wonderful to this series and I can’t tell you how thrilled I am to have found these authors. If you’re looking for a fantastic M/M series, heavy on the romance but not lacking in sizzle, then you definitely need to read these books!


Divide & Conquer was provided by netgalley.com in behalf of Dreamspinner Press.
Posted by Blithely Bookish at 8:29 PM