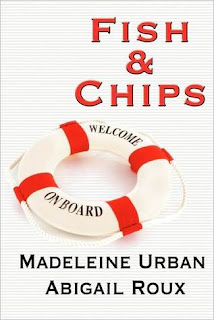 Fish & Chips is the third book in the M/M Romantic Suspense Cut & Run series, and another fantastic read!

In this installment, FBI Special Agents Zane Garrett and Ty Grady are assigned to impersonate two high ranking members of an international antiquities smuggling ring. Now, in the previous books, Ty and Zane have done a pretty good job of keeping their personal relationship under the radar of their co-workers, and just as well because they themselves aren’t sure about where the relationship is going. But when it turns out that the men they’re impersonating are an openly gay, married couple, it gives our beloved heroes a chance to find out what it’s like to be an out-and-proud gay couple, themselves.

Wow, I don’t know what it is about these stories, but I got hooked from the very first page of the very first book and haven’t looked back. Not terribly surprising since Ty and Zane are perfect for each other and an absolute pleasure to read about. I love how alpha they both are because it brings a whole new level of romance to romantic suspense. While there used to be this silent struggle between them – a struggle I’m not even sure they were aware of – over who was controlling the direction of their relationship, they’ve finally settled into their roles as partners, both on the job and off, and I have loved watching every single minute of it. They are so fiercely protective and devoted to each other, and yet both so vulnerable and afraid of risking their hearts, and the closer they get to the love word, the more their vulnerabilities show. And then that just makes me all the more protective of them!

As you can probably tell by this and my previous reviews of the books in this series, the stories are very much character driven. I find myself fascinated not only by the great story plots, but by the dynamic of Ty and Zane’s relationship. In many ways, they remind me of two of my very favorite non-couple best friend males, Butch and Vishous from the Black Dagger Brotherhood series. Although Butch and V are already in committed relationships with females, they have something in common with Ty and Zane, and that’s their need to be together. It’s not merely a 'want.' They are 100% essential to one another's existence. I honestly believe that if something were to happen to either one of them, the other wouldn't be able to go on. Slowly but surely, the one left behind would self destruct, or just fade away, because a person just can't exist without their heart.

Okay, enough rambling and failing miserably at waxing poetic. The bottom line – Madeleine Urban and Abigail Roux have done it again! I am totally hooked on this series, and madly in love with both Ty and Zane. Apart they are perfection, albeit a flawed perfection, but together they are each the vital half that completes the whole that is the amazing pairing of Ty and Zane.
Posted by Blithely Bookish at 3:33 PM