Mine Until Midnight by Lisa Kleypas 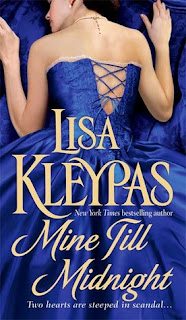 There’s something just so special about a historical romance done the Lisa Kleypas way. Light, yet with substance. So much sexual passion and yet such tender love. Her books are always a delightful escape and her heroes are always so sigh-worthy.

This is a touching story about a tight knit, albeit quirky, family consisting of four sisters, Amelia, Win, Poppy, and Beatrix; their one brother, Leo, and Merripen, who as a young boy was wounded and left for dead following a Gypsy hunt. He was brought into the Hathaway family by the siblings father and although they considered him one of them, he always kept himself apart - more than a servant, yet not quite part of their family.

In Mine Till Midnight, while there are many, many things happening involving all of the siblings, the romantic focus of the story is on Amelia, the eldest of the Hathaway siblings, and Cam Rohan who we met in Devil In Winter. I’m not going to go into plot details, because there are several sub-stories going on and it would be too complicated, so I’ll just touch on the things I loved – or not so much – about this book.

What I loved: I’ll start with Cam Rohan because I am, after all, a mature, red blooded woman with healthy desires who loves a hot, sexy man who wants to take charge in the bedroom and give as much pleasure as he gets. I especially love it when he… umm… errrr… that is to say… forgive me, for I digress. As I was about to say, I love how comfortable Cam is with who he is and who he isn’t. He knows what he wants and is willing to give up all his wealth to try and find it. He’s not a tortured soul in need of fixing, which is probably why I didn’t connect with him on some deeper level, but I wanted to bring him home and love him up all the same.

What I loved and didn’t love: Amelia. Dear, sweet Amelia; what an interesting character she turned out to be. In fact, the very thing I admired most about Amelia is that which I also disliked about her. She’s a take charge kind of woman, getting the job done no matter the cost to her own happiness. Willing to set aside any hope for a marriage for herself, she set about trying to ensure the best possible future for her brother and sisters. She was very protective of the family, which in some ways is good, but we all know that you have to let people learn lessons on their own, sometimes. Amelia was so concerned about protecting them that she wasn’t letting them live. She was suffocating them. And even when Cam came along, offering to help share her burden, she kept refusing. She had some twisted sense of obligation and responsibility for the family that made me want to throttle her with my bare hands! Fortunately, that didn’t last too long and she eventually saw the error of her ways.

Interestingly enough, the things that touched me the most about this book were not even related to Amelia and Cam, but Win and Merripen, which is who I felt the most connected to. It was heart wrenchingly clear that they care for each other – I’d even go so far as to say that they love each other.

**Spoiler**In one heart breaking scene, Merripen has been badly burned in a house fire and infection has set in. Cam knows of a poultice that he’s certain will help, but would be very, very painful to apply. So despite Merripen’s hatred of morphine, knowing he’d refuse to take it, Win devises a plot to sneak it to him in mint tea. They make the tea very strong and overly sweet to try and mask the flavor of the drug, but Merripen can still taste it. In his weakened, delusional state of mind, he’s certain that Win is trying to give him an overdose to spare him any more suffering.

Dying in her arms…cradled against her as he relinquished his scarred soul to the darkness…Win would be the last thing he would ever see, hear, feel. Had there been any tears in him, he would have wept in gratitude.

He drank slowly, forcing down every swallow. He drank part of the next cup until his throat would no longer work, and he turned his face against her chest and shuddered. His head was spinning and sparks were drifting all around him like falling stars.

Win set the cup aside and stroked his hair, and pressed her wet cheek to his forehead.

And they both waited.

“Sing to me,” Merripen whispered as the blinding darkness rolled over him. Win continued to stroke his head as she crooned a lullaby. His fingers touched her throat, seeking the precious vibration of her voice and the sparks faded as he lost himself in her, his fate, at last. **End Spoiler**

I'd have never thought to find that kind of emotional connection or torment in a secondary relationship, but that scene, the way it was so poignantly written, will stay with me for years and years to come.

I'm so thankful to have found Lisa Kleypas' historicals because, regardless of which novel I'm reading, I finish the story with a smile on my face.
Posted by Blithely Bookish at 3:43 PM