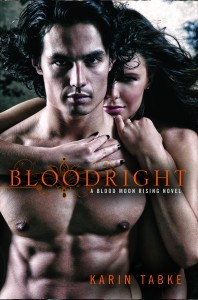 Their shared blood will destroy them in hatred–or unite them in passion…
After years of waiting, Lycan Alpha Lucien Mondragon is poised to take revenge on his brother, Rafael, by killing Rafael’s life mate, the Lycan/Slayer half-breed Falon—but he cannot complete the kill. Instead of ending her life, Lucien defiantly marks Falon as his own.

Though terrified by the savage Lucien, Falon finds herself drawn to him. Torn between the love she has for Rafael and the hunger she holds for Lucien, the will of Falon’s heart will lead her to her destined life mate–but it may also doom the brothers and the Lycan race to extinction…
******
Bloodright, the second book in the Blood Moon Rising trilogy, is fast paced, edgy, very - and I do mean very sexy… so sexy, in fact, that it borders on taboo. This book begins where Blood Law left off and right from the start it grabbed hold, and seriously, didn't let go! I can’t wait for the third and final book of the trilogy, Blood Vow, due out in December, 2012.
Reviewed for the April issue of Affaire de Coeur Magazine
Bloodright
Karin Tabke
Berkley Heat
Trade Paperback
978-0425243015
4 Stars
Posted by Blithely Bookish at 12:13 PM