A Tryst With Trouble by Alyssa Everett 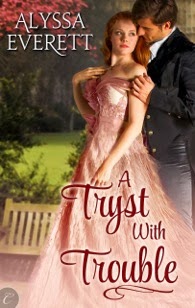 A Tryst with Trouble is finally being published! Seems Ms. Everett is another author who fell victim to the mess that is/was Dorchester Publishing and her book release was delayed...as in, it didn't happen. But I'm thrilled to share that Carina Press was smart enough to see it for the gem it is and now you all have the opportunity to do the same!

A Tryst With Trouble is a charming, funny, somewhat steamy Regency romance by debut author Alyssa Everett. The witty dialog and hilarious insights into the characters’ thoughts has made this one of the most delightful novels I’ve read in a long time.

The Marquess of Beningbrough, known as Ben to his friends and family, does not want to follow in his father’s footsteps… in fact, he wants to be as far removed from those footsteps as possible. The reason? Because of the gossip surrounding his father’s supposed homosexuality and Ben’s concern that others might think that his apple didn’t fall far from the tree. Ben’s solution? To become the ultimate man’s man so there can be no question about his own sexuality!

Lady Barbara Jeffords is the oldest daughter, and though she is not, by any stretch of the imagination ugly, she’s been passed over time and time again by suitors who favor her younger sister, Helen. Because of this, Barbara has decided that all men are shallow, arrogant and boorish, and that being single is a blessing rather than a curse.

Helen is betrothed to Teddy, Ben’s cousin, but rumor has it that Helen’s been trysting with the neighbor’s footman, and even though Teddy is ready to break off the engagement, when said footman turns up dead and it looks like Helen might be the culprit, Teddy jumps in to claim that he’s the killer in order to protect Helen.

With gossip, blackmail and murder threatening to see someone swinging from the hangman’s rope, Ben and Barbara, who are both certain that neither Teddy or Helen are guilty of the crime, work together to find out who did it and why, and this made for some great times!

Normally I have trouble with stories written in the first person, and when I realized that this was written in the first person, from two different points of view, I was a little skeptical about how it would turn out. The author did a great job of moving the story along, and even though we get both Barbara and Ben’s POV of a scene, it never felt repetitive or overdone. In fact, the POV changes gave us some of the funniest moments in the book.

The bottom line - Whew! Okay, as I said, A Tryst With Trouble is a simply delightful story filled with enough twists and turns to keep it light and highly entertaining. The most enjoyable parts of the story were those spent inside Ben and Barbara’s minds, and with their often self deprecating, laugh out loud funny banter! I’m so looking forward to reading more by this very talented author!

Posted by Blithely Bookish at 3:34 PM