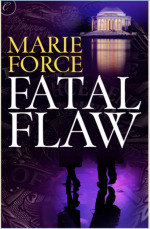 When it comes to romantic suspense, Marie Force always delivers exciting, believable stories, and Fatal Flaw, the fourth book in the Fatal series is no different.

Senator Nick Cappuano and D.C. Police Lieutenant Samantha Holland are home from their two week, romantic honeymoon on Bora Bora. Literally, just minutes past midnight on her official ‘first day back,’ Sam gets called to work, and it begins. With investigations, campaigning, cold cases, threats, cheating husbands, missing people and murder, Sam and Nick find themselves thrust back into life as they’ve come to know it; busy, bloody, and dangerous!

Fatal Flaw is a great addition to the series, and while I was happy to see so many things finally start to come together, what I was most impressed by was the way Ms. Force handled the issue of Terry O’Connor’s alcoholism. Openly, no sugar coating, Terry laid it all out and accepted responsibility for his actions. This was handled with honesty and compassion and without exploiting alcoholism or making it all about the drama.

“I told you—we’ll keep trying until we get it right. However long it takes. I’m not going anywhere, Jeannie. No matter what.”

Another thing that I was so pleased to see was how Jeannie McBride was beginning to heal from her kidnapping and rape, with the help of her boyfriend, Michael. I adore him for his dedication and devotion to Jeannie, and I adore her for not giving up.

Okay, I need to get this off my chest... Something that really bugged me was Sam's repeated derogatory thoughts about Stahl's weight, not just in this book, but throughout the entire series. I mean, seriously... every time the man was on the page, Sam noted his "jiggling" or "wiggling" jowls, his sweating, his turning purple... Sure, the guy is repulsive, but he'd be repulsive even if he didn't have an ounce of fat on him, and so with each passing scene it started to feel as though Sam's revulsion towards him was as much about his weight as it was about him being an asswipe. And, as I am a woman who carries some extra weight and have been known to jiggle from time to time myself, it started to become a bit much. Just sayin'....

This final quote, a quick exchange between Sam and Nick, pretty much sums up their life:

“Holy shit.” His voice was unsteady, and she could feel a slight tremor in his muscles. “Holy freaking shit.”

“Look at it this way—never a dull moment.”

That drew a reluctant chuckle from her husband. “Dull is boring and overrated.”

“I’d love the opportunity to find out.”

Tipping her chin up to receive his kiss, he said, “Not gonna happen in this lifetime, babe.”

The bottom line - While this book isn't without flaws, once again Marie Force has written a romantic, passionate, heartwarming, thrilling story that kept me guessing as to who the bad guy was and what the motives were. I enjoyed seeing how tight Sam and Nick's relationship has become... the honesty, the love, devotion... great stuff, that.

This book was provided by netgalley.com in behalf of Carina Press.
Posted by Blithely Bookish at 10:43 PM