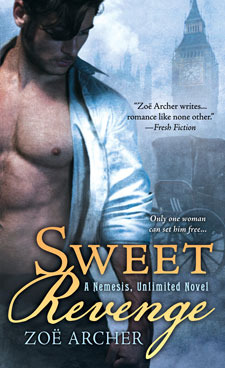 When Jack Dalton escapes from Dunmoor Prison, he has only one thing in mind—finding the nobleman who murdered his sister and making him pay. But when he reaches the inn where the Lord Rockley is rumored to be staying, three well-dressed strangers are there to meet him instead. And the pretty blonde is aiming a pistol right at his head …

Joining Nemesis, Unlimited has made Eva Warrick much more than the well-mannered lady she appears to be—one who can shoot, fight, and outsmart any man in the quest to right the injustices so often suffered by the innocent. She’s not afraid of the burly escaped convict, but she is startled by their shared attraction. She and her partners need Jack’s help to get to Rockley, but Eva finds she wants Jack for scandalous reasons all her own…


Sweet Revenge is the first book in Zoë Archer’s Nemesis, Unlimited series. It’s a Victorian romance, but unlike any Victorian romance I’ve read before and, first page to the last, I loved it!

This is one of those rare “first in a series” books that doesn’t feel like a first. The world is interesting, exciting, and complex, but not so complex that you need a glossary of terms or pedigree chart at the end to understand what’s happening. Instead of seasons, balls, the ton, peerage and all the other mundane happenings associated with the men and women of the era, this is a gritty world where murder, rape, and thievery go unpunished if you have the right title. And, should you attempt to rectify the wrongs against the innocents, you’re likely to become a target yourself.

Enter Nemesis, Unlimited! I love these Robin Hoods of Justice! Their ideals and their dedication to each other and to making the world a better, safer place for everyone, make them men and women to not only respect and admire, but to fear.

I absolutely adore Jack Dalton! From the very first page he commands attention, not just due to his size and brutish strength, but in his determination to right the wrong against his sister. He makes no excuses for her part in what happened, but will stop at nothing to see her killer brought to justice, as quickly, painfully and permanently - in other words, dead - as possible. As we learn more about Jack and his past, my heart ached for him. I wanted nothing more than to see him get the vengeance he so desperately needed in order to move on with his life.

Eva Warrick is a great heroine, and I was quickly on her side, cheering her on as she stopped at nothing to get Jack to join them. They too sought out Lord Rockley for yet another of his wrongs against women, and knew that Jack was their secret weapon in bringing him down. She’s a no nonsense kind of woman who has dedicated her life to her work with Nemesis, Unlimited. Jack wasn’t easily convinced to join them, but Eva’s refusal to take no for an answer, and Jack’s growing attraction and admiration for her, make it hard for him to walk away. Apart, Jack and Eva are great people, but together they are amazing. They're both aware of their sexuality chemistry - it's undeniable, after all - but it’s a slow burn that they take their time acting on, and that just makes the wait that much more seductive.

The bottom line: Zoë Archer is a talented author with a gift for getting right to the heart of her characters, making their stories compelling and their happily ever afters well deserved. Sweet Revenge is a great start to this series, and I’m so looking forward to reading Dangerous Seduction, Simon Addison-Shawe and Alyce Carr’s story.

My thanks to Zoë Archer and St. Martin’s Paperbacks for providing me with a copy of this story in exchange for an honest review.

Posted by Blithely Bookish at 12:39 PM