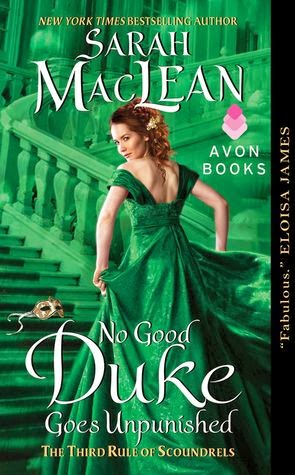 He is the Killer Duke, accused of murdering Mara Lowe on the eve of her wedding. With no memory of that fateful night, Temple has reigned over the darkest of London’s corners for twelve years, wealthy and powerful, but beyond redemption. Until one night, Mara resurfaces, offering the one thing he’s dreamed of . . . absolution.

Mara planned never to return to the world from which she’d run, but when her brother falls deep into debt at Temple’s exclusive casino, she has no choice but to offer Temple a trade that ends in her returning to society and proving to the world what only she knows . . . that he is no killer.

It’s a fine trade, until Temple realizes that the lady—and her past—are more than they seem. It will take every bit of his strength to resist the pull of this mysterious, maddening woman who seems willing to risk everything for honor . . . and to keep from putting himself on the line for love.

Sarah MacLean’s Rule of Scoundrels series are some of my very favorite stories ever. I’ve loved each and every one, and am always left dying for more! This third installment, No Good Duke Goes Unpunished, is Temple’s story, one I’ve been waiting for for what seems like forever! I knew it’d be awesome, and I was right.

As to the plot of the story I’ll only say this; I’m someone who thinks the world would be a much lovelier place if people would just accept responsibility for their actions and not make ridiculous excuses for why they had to steal that car or why they had to tell that lie or why they had to blow up that building… you get the idea… and because I feel this way I love how this story played out. Where I might normally have been unable to forgive certain people for their actions, for the choices they made, I came to adore them because not only did they accept the selfishness of their poorly thought out plans, they set about making restitution – even when it meant losing all they held dear.

Sarah MacLean is a gifted author and though there were a few spots where the story seemed to drag, I truly enjoyed this tale of restitution, redemption, and a love so strong it was to forgive past wrongs. It's tragic and hopeful and passionate and poignant and romantic … it's Ms. MacLean’s brand of storytelling, her beautiful way of bringing her characters to life and making us fall in love.