Intrusion (Under the Skin #1) by Charlotte Stein 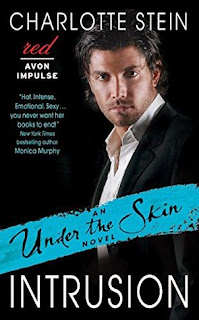 Intrusion is a story I had a hard time reading, at the same time not being able to put down. To say it’s gripping is to say the least, and finding the exact words to do this story justice will not be easy.


I believed I would never be able to trust any man again. That kindness was only for fools and would lead me down that same terrible path into darkness. I thought so with every fiber of my being-and then I met Noah Gideon Grant.

Everyone says he's dangerous. He never comes out of his house-a place that looks like it could be featured in Serial Killers Monthly. But the thing is … I think something happened to him too. I know the chemistry between us isn't just in my head. I know he feels it, but he's holding back. The pleasure he gives me is unreal-if only I could give something in return. If only he would let me in. I think I can make him feel something good. And for the first time in forever, I want to.

He's made a labyrinth of himself. Now all I need to do is dare to find my way through.

Reading Intrusion… well, at first I wasn’t sure what in the hell I was getting myself into…

…because this story isn’t at all what I was expecting. This is not my first Charlotte Stein book, but it’s definitely turned out to be my favorite. I want to call it a psychological thriller, but that’s not exactly right. A dark, romantic suspense might be more apropos, but I also have to add it’s one sensually erotic, passionate, poignant, and romantic journey. It’s a tale about two people who, for all intents and purposes, should be ruined, but who find a way to protect themselves by hiding behind the carefully constructed walls of their lonely but comfortable lives. Their journey… and that’s what it is, a journey… to finding their way back into the light is one that will stay with me, and in some ways haunt me, for a very long time.

If you enjoy darker stories about the resiliency of the human heart and the undying hope of the human soul...

...then definitely give Intrusion a try. It’s typical Charlotte Stein in that it’s told from the first person (heroine)POV, with a lot of internal dialog – some of which had me laughing out loud at the absurdity of Beth's thoughts, and other times wanting to weep at the harsh reality of them, too. Such an emotional roller-coaster read!

Note: This story can be read as a stand alone. While there's an ongoing theme, a different couple is the focus of the next book.

An ARC was provided by Red/Avon Impulse via Edelweiss. In return I’m giving them an honest review.
Posted by Blithely Bookish at 10:17 AM