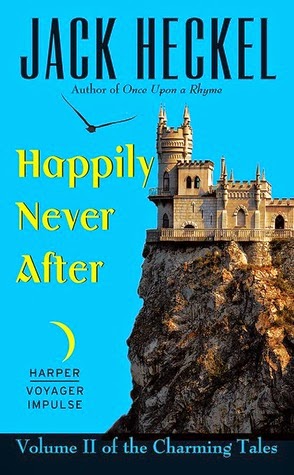 Happily Never After, Volume II of the Charming books, picks up where Once Upon a Rhyme left off and continues the story of the less-than-prince-like Prince Charming's plight. As with Once Upon a Rhyme this story is a mix of various classic fairytale characters and loaded with humor.


Once upon, once again…

The dragon has been slain, but the problems have just begun for Prince Charming.

Disowned by his father, the King, and abandoned by his only friend, William Pickett, Charming must find a new path in life...but he's going to need a lot of help. His love, Liz, barely survived an assassination attempt; his former fling, Rapunzel, is in danger; and William is under an evil spell cast by Princess Gwendolyn.

The fate of Castle White hangs in the balance as Charming tries to find himself, while finding new allies along the way — including an odd number of dwarfs (or is it dwarves?) and a reformed beast. But he's running out of time to stop royally ruinous wedding bells from ringing…

To be clear, I'd say these books are comparable to Shrek, The Princess Bride and, because of the eye rolling humor, Robin Hood: Men in Tights. I enjoyed Happily Never After, but I have to be honest - with this brand of humor a little goes a long way with me and I found myself setting it aside often. That's not a criticism of the story which is funny and clever, just that it would probably be enjoyed more by younger readers - say the 11-15 crowd, though I've seen that many adults adore it, too.

An ARC was provided by Harper Voyager, and in appreciation I'm giving them an honest review.

Posted by Blithely Bookish at 6:48 PM