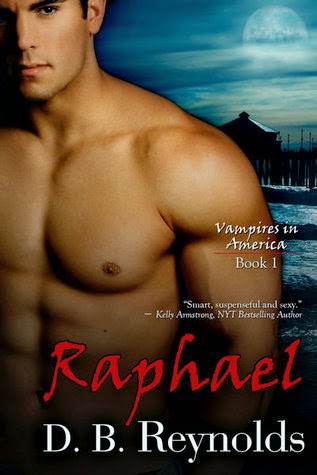 It’s an intense and exciting world D.B. Reynolds has created in Malibu, California “-home to rock-and-roll gods and movie stars, the beautiful, the rich . . . and vampires.” I was sucked (no pun intended) in from the start, and fell madly in lust with the Vampire Lord, Raphael!


Powerful and charismatic, Raphael is a Vampire Lord, one of the few who hold the power of life and death over every vampire in existence. Thousands call him Master and have pledged absolute loyalty on their very lives. But when, in a brazen and deadly daylight attack, a gang of human killers kidnaps the one female vampire he'd give his life for, Raphael turns to a human investigator to find his enemies before it's too late.


Cynthia Leighton is smart, tough and sexy, a private investigator and former cop who's tired of spying on cheating spouses and digging out old bank accounts. When Raphael asks for her help in tracking down the kidnappers, Cyn's happy to accept. But she soon realizes her greatest danger comes not from the humans, but from Raphael himself.


Battling Russian mobsters and treacherous vampires, and betrayed by those they trusted, Cyn and Raphael find themselves fighting for their lives while caught up in a passion of blood and violence that is destined to destroy them both.

***********
I’m a vampire hussy born, so to speak, during the days of Twilight-mania and then reared on the streets of Caldwell, NY with the Black Dagger Brotherhood. I’m not sure how it is I never read this story – or the series – given that I own the first six or so books. What a travesty, that!

If you’re a fan of Paranormal Romance and Vampires but are tired of the same old done-to-death stories, as I am, then I’ll tell you this… don’t wait another second. Grab this book – well, at the least the first two books – and prepare to be WOW’d!

Though, I do have to admit/warn that I was left with my mouth hanging open when I discovered that, despite the attraction and intense sexual chemistry between Raphael and Cyn, there's no happily ever after in this book. But according to my dear friend, Karla, that is resolved in book two which is why I say you need to have both books on hand.

But seriously, it’s not often I’m left desperate for the next book in a series, but I was this time!

Posted by Blithely Bookish at 10:36 AM