I Married the Duke (Prince Catchers #1) by Katharine Ashe 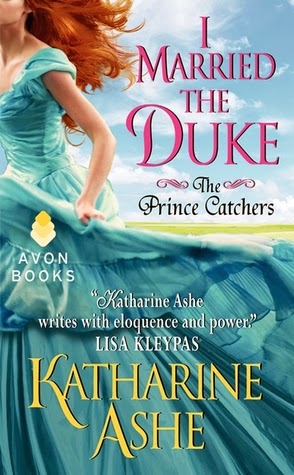 There were moments I loved this story, and moments I wanted to scream because things were taking so long to work out, but all in all I Married the Duke is an entertaining tale!

Arabella Caulfield, one of three orphaned sisters, has clung to an ancient gypsy prophecy as the only way to save her family from endless heartbreak. Now she has twelve days to reach a remote French castle and fulfill her destiny: to marry a prince.

Along the way, Arabella meets Lucien Westfall, decorated naval captain and the new Duke of Lycombe. She thought he was a pirate. He thought she was a governess. Two wrongs have never made such a scandalously perfect right.

It's interesting that as I read other reviews of this book, many people loved the beginning and hated the end, saying that things dragged. I feel just the opposite! The beginning drove me crazy with what felt like dialog that was forced and slow. That said, by the end of the story I was hooked and immediately started reading book #1.5, Kisses, She Wrote, which is fabulous!

I truly enjoyed the secondary cast, and some of my favorite scenes were those spent aboard merchant brigantine Retribution. Unique locales and quirky characters have made this a story I won't soon - if ever - forget!

I highly recommend I Married the Duke to anyone who loves Regency era romance, but please don't be discouraged by the slow start. For while there, I had a tough time feeling much of anything except annoyance at Bella and Luc. But again, by the end of the story I was completely invested in them and fell in love with their much deserved happily ever after.

An ARC was generously provided by Avon Books. In appreciation I'm giving them an honest review.

Posted by Blithely Bookish at 8:00 PM