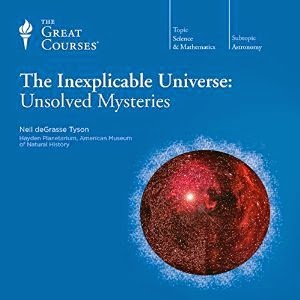 Neil deGrasse Tyson is absolutely brilliant narrating this set of lectures in Audible's The Great Courses series. His excitement for these unsolved mysteries is apparent and that made me even more fascinated by what I was learning. It was nice to be able listen to a single lecture, then not have to recap when I started listening again because these lectures are topic-unrelated to each other.

Overall, my favorite part of The Inexplicable Universe: Unsolved Mysteries, is getting the behind the scenes scoop on how some of our greatest discoveries were made, and why some of our most thought provoking questions remain unanswered.

This is a must listen for anyone who finds themselves looking at the world around them and wondering...

Everything we now know about the universe - from the behavior of quarks to the birth of galaxies - has come from people who've been willing to ponder the unanswerable. And with the advent of modern science, great minds have turned to testing and experimentation rather than mere thought as a way of grappling with some of the universe's most vexing dilemmas.

So what is our latest picture of some of the most inexplicable features of the universe? What still remains to be uncovered and explored by today's scientists?

"We know a lot about the universe. But there's even more that we don't know," says astrophysicist and professor Neil deGrasse Tyson, director of the Hayden Planetarium, an award-winning lecturer, and one of the world's foremost experts on the secrets of the universe. This course, which has been honored with a 2013 Telly Award for Outstanding Educational Program, features six self-contained lectures that transport you on a marvelous journey to the frontiers of the known (and unknown) universe and introduce you to tantalizing questions being addressed by the world's top scientists. Engaging and fascinating, this lecture series is a wonderful entrée to scientific pursuits that lie at the very heart of the history and nature of our universe.

Disclaimer: Please note that this recording may include references to supplemental texts or print references that are not essential to the program and not supplied with your purchase.
Posted by Blithely Bookish at 5:37 PM

Email ThisBlogThis!Share to TwitterShare to FacebookShare to Pinterest
Labels: non-fiction, the great courses