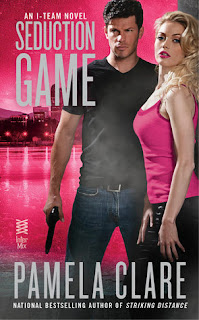 
CIA officer Nick Andris wants revenge. His last mission failed after a Georgian arms smuggler killed his lover. He’s been tailing a woman for three weeks hoping she will lead him to his target. But there’s a problem with the intel. Holly Elise Bradshaw is nothing more than an entertainment writer with a love for sex and designer clothes. Clearly someone at Langley made a mistake . . .

When Holly finds herself in trouble, the only weapons at her disposal are her brains and her body. But they won’t be enough to handle the man who’s following her. He’s going to turn her world upside-down.

My favorite stories are those with heroes and heroines whose bravery and intelligence and capacity to love know no bounds, and such is the case with Holly and Nick in Pamela Clare’s 7th installment of the I-Team series, Seduction Game. I know there will be some who might be surprised that Holly Bradshaw fits this description, but trust me on this – forget everything you thought you knew about her and prepare to be blown away!

I’ll be honest with you, when I heard that Holly was getting her own story my first thought was “why?”, because in the earlier books she was always a background – I mean, sure, she was there as a great friend, but to me she always felt like...filler. But within minutes of that wayward thought I’d come to my senses and knew she’d be great for the simple reason that Pamela Clare doesn’t write empty characters. Even her supporting casts are made up of people we either love or hate, so well developed are they. So I knew, I knew that Holly would turn out to be a woman with incredible depth and I was not wrong.

This is a fast paced, exciting, burn up the pages story, and offers further proof (though no further proof is needed) of Pamela Clare’s amazing writing talent. Despite the hell she’s lived through these past couple of years, she gave us Holly, who along with Nick and the rest of the I-Team, made Seduction Game one of my favorite romantic suspense reads of 2015!