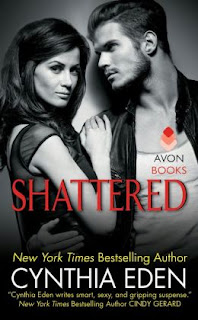 In New York Times bestselling author Cynthia Eden's latest novel featuring the Last Option Search Team (LOST), one agent is forced to face her past as she uncovers secrets about the man who may be the key to her future.

Criminal psychologist Dr. Sarah Jacobs is all too familiar with the kind of bad boys who belong behind bars. But the dark, dangerous man she meets in the New Orleans underworld is a new kind of ruthless, and all too irresistible.

Jax Fontaine doesn't claim to be a good guy, but he's loyal to his own code and brutally honest about what he wants. He and Sarah may be worlds apart, but when they're skin to skin, nothing matters but the heat between them.

And when a deranged killer targets Sarah, Jax will do whatever it takes to keep her safe.

Much more than romantic suspense, this is a romantic thriller and I loved every word!

I’ve been fascinated with - and drawn to - Jax Fontaine since he first step foot on the scene, and that fascination has just grown stronger as the stories continued. To say I was thrilled to finally learn more about him is putting it mildly, and now that we know him better…I’m head over heels in deep with this man. Sarah Jacobs is also an intriguing character whose story is heartbreaking. But despite her past she’s an incredible woman whose intelligence and compassion know no bounds. Apart they're amazing but put these two people together and you have an intensely complex couple who challenge each other, better each other, and burn up the pages! Seriously, this is a great read!

If you’re a fan of romantic suspense with lots of romance and steam, be sure to give Cynthia Eden’s LOST series a try. You’ll be glad you did.

An ARC was provided by Avon Books. In appreciation I’m giving them an honest review.
Posted by Blithely Bookish at 6:38 AM