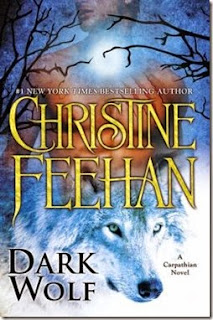 In Dark Lycan, Christine Feehan journeyed into the heart of the Carpathians, and into the souls of two lifemates stirred by the flush of passion and the threat of annihilation. In Dark Wolf, the breathtaking story continues as the bonds of family are imperiled, and the fate of two lovers lies hidden in the seductive shadows between life and death.

Skyler Daratrazanoff always recognized the miracle that was Dimitri Tirunul, a man beyond any dream that had ever engaged her nights. But she was human. Vulnerable. He was Carpathian. Nearly immortal. She was nineteen. He was an ancient. Yet she held half his soul, the light to his darkness. Without her, he would not survive. Caught between the two warring species, Dimitri has spent centuries hunting the undead to keep his people free, and humans safe. He had survived honorably when others had chosen to give up their souls. But now, marked for extermination by the Lycans, Dimitri found himself alone, and fearing for his life. But salvation was coming…

No Lycan would ever suspect someone like Skyler to dare mount a secret rescue operation. A teenage girl. A human of untested abilities. But she had something no one else had. She was predestined for Dimitri—as he was for her. And there was nothing stronger for Skyler than her desire to see her life-dream come true. Whatever the risk.


Dimitri and Skyler's story is amazing! It's exciting, romantic, but most of all, it's poignant. The childhood hell Sky lived through wounded her, but didn't break her. She's stronger than ever and with Dimitri's unconditional love and encouragement she's becoming a force to be reckoned with!

These last few installments I've read have blown me away! Non-stop action, passion, lots of twists and turns, and the Carpathian's world is changing in ways I never imagined, but am totally excited about.

If you're a fan of fantasy/paranormal romance but haven't yet read Ms. Feehan's stories - any of her series - you're missing out! Wait no longer, and just take the leap into some of the most amazing fictional worlds out there. You'll be glad you did!