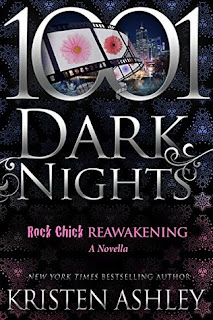 From New York Times bestselling author, Kristen Ashley, comes the long-awaited story of Daisy and Marcus, Rock Chick Reawakening. A prequel to Kristen’s Rock Chick series, Rock Chick Reawakening shares the tale of the devastating event that nearly broke Daisy, an event that set Marcus Sloane—one of Denver’s most respected businessmen and one of the Denver underground’s most feared crime bosses—into finally making his move to win the heart of the woman who stole his.


Like many of you, I've always imagined what Daisy and Marcus' story must have been like, the romance and the poignancy behind their happily ever after. The power of their love to overcome anything and everything. The chance to get inside Marcus' head - and his heart - and discover all the things he feels for Daisy, and why he feels them. This isn't just wonderful, it's AMAZING!

I remember Kristen Ashley saying that she knew everyone wanted this story, that it was one of the most highly requested books, but that she wasn't sure how to do them justice, doing it going backwards and in a novella. Well, she might have been worried, but I wasn't. I wasn't apprehensive. I wasn't concerned their story wouldn't measure up - this is KRISTEN ASHLEY we're talking about! She can write no wrong!!! What I was was captivated, completely drawn in, and totally swept off my feet.

I laughed.
I cried.
I sighed.
I cried some more.
And in the end, I came away loving Daisy and Marcus even more than I did from the beginning.

Needless to say - but I'll say it anyway - I love this story. One of the best of the series. Daisy and Marcus now (officially) hold a place of honor on my Top Couples of All Time shelf.