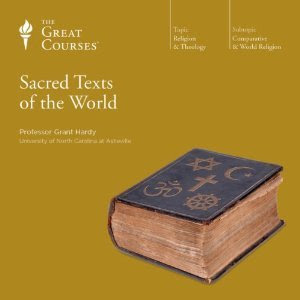 With few exceptions, the world's religions are anchored in their sacred texts-core writings that express the ideals and vision of the faiths, forming a basis for belief and action. Humanity's library of sacred writings is a huge canon that includes many of the most influential books ever written. In addition to the Hebrew and Christian bibles and the Quran of Islam, major sacred writings include the Hindu Vedas, the Buddhist Sutras, Daoism's Daodejing, and the Analects of Confucius, as well as the beloved texts of religions such as Zoroastrianism and Jainism, and modern faiths such as Baha'i.

These are texts that people live by and, at times, are willing to die for.

In these 36 lectures, Professor Hardy takes you deeply into the body of sacred writings that have played a fundamental role in human culture and history. Discussing a broad range of texts, the course examines the scriptures of seven major religions, as well as nine lesser known or smaller faiths, including texts from the ancient Egyptian and Mayan societies. In addition to studying the scriptures of the Judeo-Christian and Islamic worlds, you'll discover religious texts from vastly differing cultures around the world.

These richly insightful lectures highlight a global legacy of faith, thought, and spirituality.

I am impressed - soooo impressed - with Professor Grant Hardy's lectures on Sacred Texts of the World. It's one of Audible's The Great Courses and it is fascinating! It covers ancient texts as well as modern, and everything in between.

Why am I so impressed? Because he gives us 36 faith specific chapters worth of lectures (each about 30 minutes long) and even though he can't possibly have lived each of these religions, he shares informed, impartial, compassionate insights. He talks about the text's level of importance to each faith, and not once did he mock, make light, snicker, or disrespect those that he might disagree with. Nor could I even tell if he disagreed with any of them!

Sacred Texts of the World has easily become one of my favorite of The Great Courses.