Eyes of Silver, Eyes of Gold by Ellen O'Connell 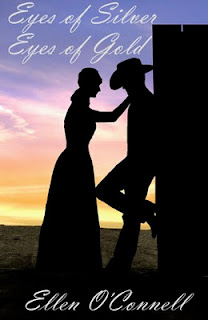 As he finally stopped fighting sleep, he wondered if maybe just occasionally the gods designed a woman fit for a king or a prince and then gave her to an ordinary man. Maybe they did such a thing once in a while, knowing an ordinary man would treasure her more, love her better. Maybe they even let him keep her — for a while.

Wow! Where to begin... well, I'll start with that quote. It's one of my favorite hero quotes from any book I've read, and in just a few sentences shows us Cord's hope and his heart. And reading it again for the umpteenth time, knowing what led up to it, I'm having a hard time holding back the tears.

Cord Bennett is an outcast, a savage, a pariah. He has no real friends, and even his family is afraid of him. Under different circumstances - that is to say, if he were like the other, 'normal' men in town, the things he’s done would be understandable, but his father was white and his mother was Cherokee, so Cord is – *gasp* – a half-breed, and nothing about him is the least bit acceptable.

Anne Wells isn’t the proper young woman her parents want her to be. She’s not a ravishing beauty or in the least bit biddable. She’s stubborn, and again– *gasp* – she thinks for herself, so when her father arranges her marriage to a man who is all kinds of repulsive, Anne not only makes her displeasure known, she does everything she can to make sure the wedding never takes place. When Anne’s father stoops to an all time low, thinking he can force her into agreeing, Anne knows that she needs to escape the hell that has become her life, before it’s too late. But when she chose to hide in Cord Bennett’s barn and ask for his help, she had never even considered that the hell she had escaped was nothing compared to that which she and Cord would have to endure together.

I really don't think I'll be able to explain why this story evoked such a deep, wide range of emotions… well, not and do it coherently, anyway. I was so angry at times, so heartbroken at others, sobbing so hard I was shaking and my chest hurt. Maybe it was just timing. Maybe had I read this another day, week or month, it wouldn’t have affected me the way it did, but honestly, I don’t think timing had anything to do with it. It was the characters, their story, their determination to live their lives in peace, their incredible strength of character and their pride. It was their unwillingness to allow others to break them, their ability to find happiness in the smallest things. But most importantly, it was what they found in each other; someone to share with. To share the work, the heartache, the joy, the secrets they'd kept buried for so long... someone to make being alone seem less lonely. And they saw in each other what no one else could see... Kindness. Honor. Generosity of spirit. And most importantly, through all the adversity, all the heartbreak and trials, they found in each other a happily ever after for the ages.

The bottom line - Cord and Anne captured my heart, and when their story broke it into a million pieces, they were there to put it back together again. The writing isn't flawless, but it's all of the things I mentioned... the sorrow, the joy, the sacrifice, determination and devotion... all of these things combined have made Eyes of Silver, Eyes of Gold one of my favorite stories ever, and Cord and Anne have more than earned their place of honor on my Top Couples of All Time shelf. If you love stories whose characters touch your heart, who pull you in and don’t let go… if you want their trials and triumphs to really mean something, then you’ll want to get your hands on this book as quickly as possible.

This is a beautiful story, one I won't soon forget. Thank you, Autumn. From the bottom of my heart, thank you, because without your encouragement and generosity, I probably would have never read this story, and what a horrible loss that would have been.
Posted by Blithely Bookish at 4:50 PM