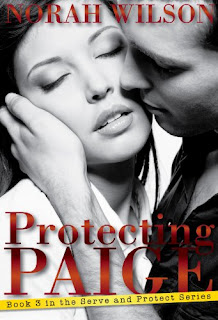 Tommy Godsoe’s life hasn’t always sucked, in fact until recently, it’d been pretty damned awesome. Being a cop was his life, being a dog handler was his passion, but being shot during a police raid has put a damper on things. Days that were once spent serving with honor and purpose are now filled with pain and uncertainty. Unable to stand the thought of the pity he'd see in the eyes of his ex-fellow officers, Tommy has closed himself off from any and all contact, but much to his displeasure, the fortress of painkillers and bitterness he’s locked himself in has been well and thoroughly breached by his new neighbor who comes bearing dinner, and — despite his best efforts to get rid of her, won’t take no for an answer.

It’s not easy being a single parent, just ask Paige Harmer, she’ll tell you. Her son, Dillon, is a really great kid, but at 18, he’s not much of a kid anymore, and so Paige has to perform that tough balancing act of caring but not smothering. Dillon’s smart, respectful, ambitious… he’s pretty much everything a mom could hope for in a son, but unfortunately for them, his clean cut, boy next door image is exactly what Derek Weaver is looking for, and Derek is not one of the good guys.

Nervous and in need of something to do and someone to talk to, Paige takes dinner to her next door neighbor who, according to her landlord, is recovering from a recent surgery. The man is gruff, rude and clearly unappreciative of her offering, but Paige, being the strong, persistent woman she is, won’t take no for an answer.

Protecting Paige is the third book in the Serve and Protect series and is, hands down, my favorite! Being a parent myself, I always worried that my kids would fall in with the wrong crowd and get involved in things they shouldn’t, so I was able to relate to this story. And because Paige was facing those same things that all parents are familiar with, her character drew me in. Her strength, her devotion to her son, and her determination to do whatever she had to do to protect him…the magnitude of her love for him truly pulled at my heartstrings and made her a woman I could understand and admire.

And then there’s Tommy. Though we didn’t see a lot of him in the earlier books, we saw enough to know that he was an honorable cop who loved his job and the men he worked with. It was a little bit heartbreaking to see the bitterness that had taken hold of him, heartbreaking but understandable. I can only imagine what it would be like at 30 years old to lose any chance of returning to the job you loved, the one you’d planned to spend the rest of your life doing.

I've always felt that when things go wrong in your own life, when you just can't figure out what to do next... help someone else. Instead of feeling sorry for yourself or fretting over things you can't do anything about, devote your time and energies to the needs of others and everything else will fall into place. So, with that in mind, one of the high-points of this book, for me, was that when Tommy did just that... when he focused on helping Dillon and Paige... that's when things in his own life fell back into place and he once again became the man he was born to be - an honorable, powerful, caring man and a force to be reckoned with!

The bottom line – If you’re like me you love romantic suspense, but sometimes you want the stories to be about everyday people, people who could be your friends, neighbors, or even yourself. You want to be able to relate to what’s going on in their lives, believable events and situations that could, for the most part, happen to anyone. So yeah, if you look for those things in stories, too, then I really do think you’d enjoy Protecting Paige. It’s emotional but not angsty, the characters are flawed but not stupid, and the friendship, the romance, the courage... all of these things combined have made this my favorite book in the Serve and Protect series and I’m hoping there will be many more books to come!