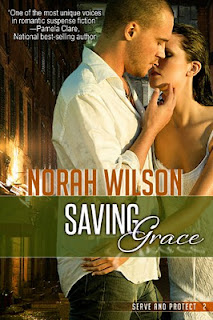 Police Detective Ray Morgan and his wife, Grace, an up-and-coming newspaper reporter, have it all – jobs they love, a nice home, and the perfect marriage. Or so it seemed. But when Grace announces that she’s leaving Ray for another man… well, no one ever saw that coming, especially not Ray. Stunned and devastated by Grace’s revelation, Ray can only watch as the woman he loves walks out the door. He can't imagine anything being worse than this, but then just a few hours later he gets a phone call telling him that Grace has been in a car accident. The angry, betrayed part of his heart tells him to keep his distance, to let her lover care for her now, but the husband part, the part that still loves her, wants to go to her, to make sure she’s okay. When Grace claims no recollection of the hours before her accident, Ray can’t be sure whether she’s faking the amnesia or not. He wants to believe her, but doesn’t want to be hurt again, but can he trust her… does he want to?

Saving Grace is the second book in Norah Wilson’s Serve and Protect series, and another exciting read. When we first met Grace and Ray in Guarding Suzannah, we learned that Ray is well liked and respected by his fellow officers, devoted to his job and very good at what he does. But despite Ray's camaraderie with the guys, both on and off the job, Grace has never quite felt like she fit in, never felt that she was really accepted by the wives of the officers Ray works with. She’s smart, pretty, chic, and perfectly proper… not at all like the other women, so of course things might be awkward for all of them. But what I loved about Grace in this story is that we get to see the woman she really is, her heart and soul, and we also see that the car accident is probably the best thing that could have ever happened to their marriage.

Now, you might be thinking, 'Oh, no! Not another amnesia story!!' because yeah, let's be honest… that storyline has been done time and time again, especially in romantic suspense, but I have to say, I really enjoyed this version of it! It’s fresh, exciting, emotionally charged… and watching Grace and Ray, these two people who care deeply for one another, try to salvage their marriage by learning the truth about what led up to Grace’s supposed affair… it was both heartbreaking and heartwarming, and in the end, absolutely beautiful.

The bottom line - Once again Ms. Wilson has created a story that fits her characters, and characters that make the story. Even though there were moments of predictability, I enjoyed Saving Grace a lot. It’s romantic, passionate and very sexy, and I’m soooo looking forward to reading the next book in the series, Protecting Paige and anything else I can get my hands on by Norah Wilson!
Posted by Blithely Bookish at 11:51 AM