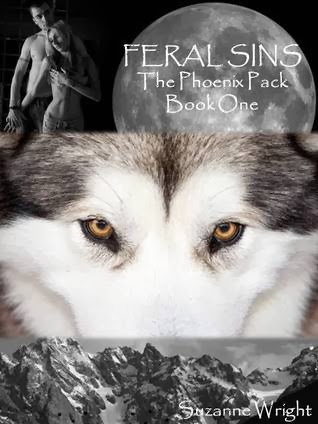 When female wolf shifter Taryn Warner first encounters Trey Coleman, an alpha male wolf shifter with a dangerous reputation, she’s determined to resist his charms. After all, Trey—who was only fourteen when he defeated his own father in a duel, winning the right to be alpha of his pack—can’t have anything to offer the talented healer besides trouble, or so she thinks.


Taryn finds herself drawn in by Trey’s forceful demeanor and arctic-blue eyes, and she eventually agrees to enter an uneasy alliance with him. If the two succeed in convincing their respective packs that they’ve chosen each other as mates, Trey will win valuable political allies, while Taryn will escape an odious arranged mating.

But there are a lot of potential pitfalls to this plan—including the very real possibility that the wolf shifters, overwhelmed by their growing attraction to each other, will be unable to maintain the clear heads needed to pull off the deception.

Feral Sins is the first book in The Phoenix Pack series, and Suzanne Wright has created a very interesting, exciting, primal, and yes, feral, world. And I love it because, in my opinion, nothing sets the stage for erotic romance better than the paranormal genre. There are no holds barred, everything is fair game, things we might not accept or be comfortable with in the human world are somehow more acceptable, somehow more comfortable, in the paranormal world. I think this otherworldly setting allows us to let go of some of our inhibitions and just enjoy the ride… and what a ride this is!

I really enjoyed reading this story, but while listening I felt the narration left something to be desired. The narrator is talented enough, but there were times I felt almost awkward listening to her depiction of conversations, the way certain things were said felt forced... over dramatized. Not the way a conversation between two people - or even a group of people - would go. But when I would turn off the audio and just read, everything sounded much better in my head than it did to my ears.

That said, I think The Phoenix Pack world is a great one. Along with our hero and heroine, the secondary characters are intriguing, quirky people/wolves who I adore and want to know more about. Sometimes the animosity amongst the pack members was a bit much, but all-in-all, Feral Sins is an entertaining, sexy story, and I’m looking forward to spending more time with The Phoenix Pack, because Dante Garcea’s story is up next, and I can’t wait to see him brought to heel!

Posted by Blithely Bookish at 10:38 PM