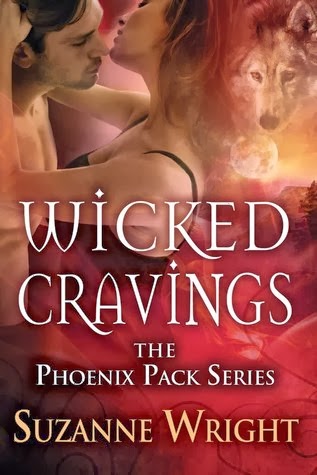 Despite having been besotted with Dante Garcea since she was a child, wolf shifter Jaime Farrow figures that it’s time to move past the crush. If he wanted her, he wouldn’t have ignored her flirtatious behavior, right? Hiding her intense attraction to him isn’t easy – especially now that they're part of the same pack again – but with bigger issues to worry about and with the submissive wolf act to maintain, Jaime is resolute on moving forward. Now if only the workaholic control-freak would let her…

As the pack Beta, Dante doesn't have the space or time in his life for a relationship. As such, he ignores his intense hunger for the willful – and sometimes crazy – Jaime. Yet when her flirtations abruptly end, Dante finds that he doesn’t like losing her attention. He finds something else too – Jaime's hiding something. Determined to uncover her secret, he sets out to break through her defenses, even though being around her intensifies his cravings for her. What he finds is a problem that Jaime is convinced not even a powerful Beta can solve.

Wow! Just… WOW! I have to say, I enjoyed the first book, Feral Sins, a lot, but Wicked Cravings is even better! I was pulled into the story from the get-go and fell hard for our Beta hero, Dante, and his kick-ass heroine, Jaime!

I’m not sure what I loved most about this story – the plot or the dialogs. I can’t tell you how many times I groaned in a giggling “oh, that was cheesy” kind of way! There are so many tongue-in-cheek one-liners that had me laughing at Dante and the rest of the Pack, even as they continue the arduous task of establishing themselves as a Pack to be reckoned with amongst the others in the area.

I wasn’t too impressed Jill Redfield’s audio book narration of Feral Sins, but I sure enjoyed her this time. She really hit the mark with her performance and I’m looking forward to listening to more of her narrations!

In my mind, Wicked Cravings has proven Suzanne Wright's genius as an author in the world of paranormal shifters, because anyone can write the genre, but not everyone does it this well. And with Ms. Redfield’s talented voice further bringing the story to life The Phoenix Pack series is a must read for fans of the Paranormal Romance/Shifter genre!

The audio book was reviewed for Affaire de Coeur Magazine

Posted by Blithely Bookish at 3:03 PM