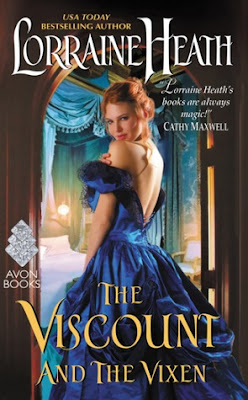 Love begets madness. Viscount Locksley watched it happen to his father after his cherished wife’s death. But when his sire arranges to marry flame-haired fortune hunter Portia Gadstone, Locke is compelled to take drastic measures to stop the stunning beauty from taking advantage of the marquess. A marriage of mutual pleasure could be convenient, indeed... as long as inconvenient feelings don’t interfere.

Desperation forced Portia to agree to marry a madman. The arrangement will offer the protection she needs. Or so she believes until the marquess’s distractingly handsome son peruses the fine print... and takes his father’s place!

Now the sedate—and, more importantly, secure—union Portia planned has been tossed in favor of one simmering with wicked temptation and potential heartbreak. Because as she begins to fall for her devilishly seductive husband, her dark secrets surface and threaten to ruin them both—unless Locke is willing to risk all and open his heart to love.


The Viscount and the Vixen is wonderful! More than a romance, it's a beautiful love story, and I can't seem to put into words how deeply it touched me. I was certain I wouldn't like her, but Portia is so much more than she appears. Even though I was shocked and appalled as her story unfolds, I often felt like my heart was being torn apart and was brought to tears for the things she endured and the choices she had to make. And Locke... what a devoted son he is! And attractive, hard working, sensual and sexy and... well, you can see, I wasn't lying when I said I'm having trouble finding the words to express what a moving tale this is.

I'm thrilled to read that the man who made this series possible, the Marquess of Marsden, and the love of his life, Linnie, will have their story told in a novella called Making Merry with the Marquess. It's due out in early 2017!!

An ARC was provided by Avon Books. In appreciation I'm giving them an honest review - albeit a short one!