Exclusively Yours by Shannon Stacey 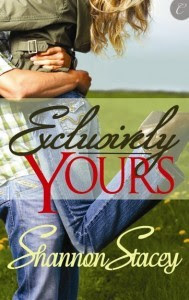 “It’s customary to offer a squeeze to determine if breasts are real or not, you know. Don’t you watch TV?”

She laughed and shoved the retrieved ballcap back on her head. “Nice try, Kowalski. You’ll have to take my word for it.”

Exclusively Yours is the first book in the Kowalski Family series, and wow! Just… WOW! It’s one of the best Contemporary Romances I’ve read and I loved every single word, every heartbreaking, heartwarming, funny, sexy minute of it! I laughed, I cried and I stayed up until almost 3AM to finish this story because I simply could not make myself put it down!

About the story - In order to save her job, one she’d spent years working hard to get, Keri Daniels must get an exclusive interview with the famous, reclusive author, Joe Kowalski. While trying to dig up dirt on Joe, her boss learned that Keri and Joe had been more than just friends back in high school - much more - and she’s given Keri a choice: use that connection to get an interview or get a new job.

Joe’s never forgotten Keri, the first girl he’d loved and the first girl to break his heart. When he finds out she’s back in town, he’s intrigued. It’s not just because she’s back, but because for the first time in 18 years of visits to their hometown, she’s looking for him, and he’s sure he knows why. Keri’s boss has been tenacious about getting an interview, so he’s not too surprised that she’d use Keri’s past connection with him to get it. When he meets with Keri over dinner to discuss her proposal, he comes up with a proposal of his own – come with him and his family on their annual two week camping trip and for every day she survives the ordeal adventure, Keri gets to ask him one question. He’s pretty sure she won’t turn him down because she’s worked too hard to get where she is. Keri’s career is everything to her, a fact he knows painfully well because pursuing a career in journalism is the reason she up and left him and small town life, heading to Los Angeles in order to make her dreams a reality.

Well, now she’s home and he’s hoping to get some of his own questions answered, and hey, maybe get her back into his bed while she’s there, too. But if he’s really lucky, this time he can convince her not to leave him again.

My thoughts - I wish I could, but I can’t even begin to tell you how much I enjoyed this book! I adored Joe and Keri, both on their own and as a couple. Watching Joe try to seduce Keri, and try to woo her into accepting that there were still feelings between them was so much fun! The emotional and physical chemistry they shared felt so real. Of course there were issues to deal with, namely Joe’s twin sister Terry who hated Keri for having dumped Joe all those years ago. When you have a family as close as the Kowalskis are, you can’t hurt one of them and expect to get off easy. Terry had been there to help pick up the pieces of Joe’s shattered world and wasn’t about to let Keri get close enough to hurt him again. Some of those moments were laugh out loud funny, and others had me wanting to beat Terry over the head, but as we read on we find out that Terry has a lot on her own plate to deal with.

There are actually three relationships happening in this book. Terry and her husband, Evan, have separated and Terry plans to file for divorce as soon as she gets home from this family camping trip. She still loves Evan and has no idea what happened to make him leave, but over the course of the two weeks, she starts to see that maybe she could have done more. Maybe she had driven him away with her constant nagging. Watching her come to realize her own part in their breakup was heartbreaking, but I loved the honesty with which it was written.

The other relationship is between Lisa and Mike Kowalski who are having their own marital difficulties. Again, watching this couple work through their problems honestly and openly was both heartbreaking and heartwarming, and at times inspirational! Both of these secondary relationship stories are resolved in this story, and in a way that I found to be totally believable, and again, inspiring.

Instead of rambling on and on I'll share a couple of my favorite quotes from the story:


Joe reached into the back pocket of his jeans and pulled out a folded sheet of spiral notebook paper. “Here’s a list of things you’ll need. I jotted it down in the parking lot.”

Keri unfolded the paper and read the list twice, trying to get a sense of what she was in for.

DO NOT BRING: cell phone; Blackberry; laptop; camera, either still or video; alarm clock; voice recorder; any other kind of electronic anything.

She had no clue what it meant, other than Joe wanting her half-naked and unable to text for help.

And this one I can relate to in a big way because it's how I feel when the internet goes down:


Keri had gone twenty-four hours without phone, email, or texting for the first time in as long as she could remember. Probably years. As wired for communication as she usually was, she’d expect to be going through some kind of withdrawal—some shaking, maybe twitching fingers. Phantom texting.

The bottom line – I loved Exclusively Yours. Absolutely adored it! If you’re looking for something light but not stupid, something with a whole cast of characters you wish were your friends and family, then get this book! There is no terrorist plot to take over the planet, no vampires or shifters attacking innocents as they sleep soundly in their beds, but what there is is a an incredible sense of family. Devotion, love, honesty, humor, and enough sexual heat to have you fanning yourself. I was so, so sad when this book ended, but very happy to have the next one on my Kindle, just waiting for me to pay another visit to those awesomely amazing, crazy Kowalskis!
Posted by Blithely Bookish at 3:01 PM