Undeniably Yours by Shannon Stacey 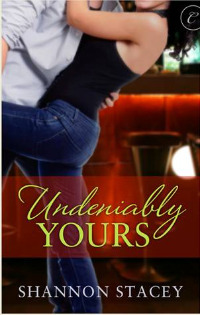 Kevin was ruined. No way in hell was he going to have a normal relationship with a woman’s vagina ever again.

Shit. He was even using the word 'vagina'. He was totally, irretrievably ruined as a man.

I LOVE these books... every single one of them!! Absolutely favorites and keepers, each and every one! Undeniably Yours is book two of the Kowalski family series and it’s funny, heartwarming, sexy… and in case I didn’t make it clear enough, I LOVED IT!

This is Kevin and Beth’s story who, after a one-night-stand, end up pregnant. Yeah, they’d used a condom, but sometimes Fate has other ideas, and I’m so, so glad for it! Just like the other books in the series, while there are definitely some very emotional moments, this is not an angst ridden story. I’ve ended each book with a smile on my face and a deep sigh of contentment!

I’m going to share a couple of my very favorite scenes and then call it done, because no amount of my raving can do this story justice -

This scene takes place when Beth meets the whole Kowalski clan for the first time. The entire event was funny as all get out, but this bit had me smiling so hard my cheeks hurt--


It was a little overwhelming, even though they were a very likable bunch of people. Like agreeing to learn the doggy paddle and being shoved off the high-dive board. And to keep things interesting, somebody told Bobby, Kevin’s youngest nephew, the baby could hear stuff and he was determined to make his new cousin his BFF in utero. It was a bit disconcerting having a kid randomly tell bad jokes to her stomach. Like now.

“Why did the weasel cross the road?” he yelled at her belly button. “To prove it wasn’t a chicken!”

Then he laughed so hard he almost fell over. He was a cute kid, she thought, and then it hit her—a little over seven years from now, she might have one just like him. Some faceless, nameless boy with too much energy and the knees almost worn out of his jeans, telling jokes to crack himself up. Maybe, if they were lucky, he’d look like his daddy, dimples and all.


Beth was laughing at his story when Bobby ran up to her. She lifted her plate out of harm’s way and smiled at Kevin over his nephew’s head as the boy put a hand on either side of her waist.

“Hey, cuz!” Bobby yelled at her stomach. “What does a snowman eat for breakfast? Snowflakes!”

Then he laughed like a loon and ran off in another direction.

And for some reason, this one really got to me. One of the simplest, sweetest ways to hear that a man had fallen hard for his woman -


Countless women had walked through his bar. Walked. Sashayed. Danced. Staggered. He’d even had a few try to climb up onto the bar and strip. Who knew he’d be turned on by the one who waddled?

So yeah, do I love these books? Absolutely!! They are fun, feel good, sweet, romantic, and very sexy stories guaranteed to leave you with a smile on your face and have you wishing that you were part of this family - or better yet - one of the lucky ladies who has stolen the heart of a Kowalski.

Posted by Blithely Bookish at 4:37 PM