Lord of the Wolfyn by Jessica Andersen 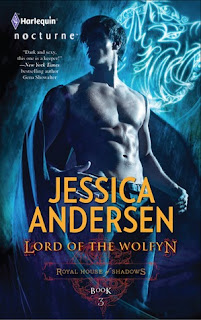 Lord of the Wolfyn is the third book in the Royal House of Shadows series and is written by Jessica Andersen who is also the author of the popular Final Prophecy series. Lord of the Wolfyn is my first read by Ms. Andersen and I really enjoyed her writing. I found it an easy style to read and follow, and to be honest, I saw shades of J.R. Ward (one of my very favorite authors) scattered throughout—not too surprising considering that they are critique partners. Or perhaps I have it wrong and there are shades of Ms. Andersen in J.R. Ward’s writing? Hmmm…

So as I said, I enjoyed the writing. I felt it flowed well and the story Ms. Andersen created was interesting, to say the least, however, I didn’t fall in love with the characters the way I must in order to really be WOW’d by a story. I never became connected to them, or invested in them. Dayn seemed “flat” to me, spending much of his time trying to appease Reda, who in my opinion, was kind of mental. I was talking with a Goodreads friend about them, and she made the point that Reda’s concern about being brainwashed or controlled was definitely bordering on paranoia, and the more I thought about it, the more I realized that Laurie had nailed what I hadn’t been able to put my finger on. A big part of my issues with Reda and her behavior was something I found… I don’t know… unreasonable based on what we, the readers, were given. And Dayn was so wrapped up in trying to make her happy, so concerned about her, that it made him seem kind of… wimpy.

Even though I’m giving Lord of the Wolfyn 3 stars, which means I did like it, I have to admit that I was also a bit disappointed. I really had hoped for something more from this book, and I hate to say it, but that something more - that buildup to final battle in Lord of the Abyss, the next and last book of the series, just wasn’t delivered.

That said, I'm definitely looking forward to reading Lord of the Abyss which is written by Nalini Singh.
Posted by Blithely Bookish at 12:01 PM