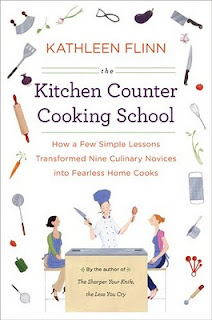 Normally, I do not stalk people in grocery stores.

I confess to the occasional practice of supermarket voyeurism. But who doesn’t sometimes notice the curious collections of fellow shoppers, then contemplate what they may reveal about them?

The Kitchen Counter Cooking School is not your typical cookbook, and not at all what I expected. It took me some time to get into the memoir-esque beginning where we learn what led Kathleen Flinn to decide to teach cooking and technique to the everyday chef – meaning people who are cooking for themselves and their families. As she tells us, it all began late, on an otherwise average Tuesday afternoon….

Late on an otherwise average Tuesday afternoon, a sight near the canned tuna stopped me dead in my tracks. The cart sat as if abandoned in the middle of the aisle. It contained two dozen haphazardly piled boxes of dehydrated mixes for pasta, casseroles, rice, and stuffing and dubious jars of gravy. Despite being half full, the cart contained no real food. As I stood contemplating its contents, a heavyset woman in her late thirties, casually attired in an eggplant colored fleece, claimed the cart. Her preteen daughter twirled impatiently around her, quietly singing a Lady Gaga song under her breath.

Would it be wrong if I followed her to find out what else she might buy?


To be honest, I found myself giggling as I imagined this playing out, and the subsequent meet-and-greet that took place when Kathleen introduced herself to said ‘heavyset woman in her late thirties’ and then proceeded to teach her how to shop better, cheaper and healthier. I’ve found myself doing similar things while shopping in bookstores and watching people walk right past some of the best books on the shelves! How can anyone pass by the historical romances, or the romantic suspense books and not even take a look! It’s appalling… I mean, the covers alone are worth taking a gander at with those hot chests and sexy chins – and why on earth do the photographers stop before they get to the eyes?? Honestly!

I enjoyed the beginning and getting to know a bit about Kathleen and what makes her tick. It was fun, there's a lot of humor in this book, but as I read on and it was more and more of the same, I found myself skimming and wanting to get to “the good stuff” – the recipes, cooking lessons, and the tip and tricks.

And when I finally found them? I love them! Great tip after tip on making stock, ways to add flavor to just about anything, how to avoid kitchen disasters... The Kitchen Counter Cooking School is a veritable smorgasbord of information that every cook, professional or novice, should have at their fingertips. The only problem I have with this book is that I like being able to flip right to a page and find what I'm looking for. I love lots of photos and to have everything spelled out for me, because I'm not a confident cook, and having to go through the chapters to find what I need didn't work for me. Yes, there was an index, but it just isn't the layout I like in my cookbooks, but that's just my opinion.

The bottom line - The Kitchen Counter Cooking School is not just a great reference guide, it's an enjoyable story. If you're looking for something more than your average cut and dry cookbook, this might just be perfect for you!
Posted by Blithely Bookish at 9:55 PM