I Dream of Danger by Lisa Marie Rice 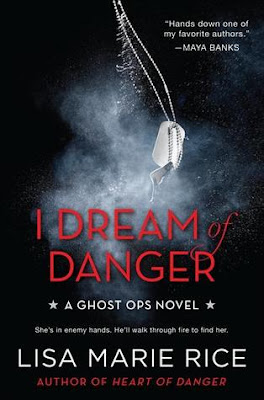 They are the Ghost Ops: a covert squad of super-elite soldiers. After their team was betrayed and massacred, the three surviving members went underground and built Haven, a community of misfits and geniuses. Now they're at a crossroads, facing a new threat capable of destroying everything they hold dear.

In the second book of Lisa Marie Rice's thrilling Ghost Ops series, the Haven team is faced with a new addition to their secret society-and a threat capable of destroying everything they hold dear.

When Nick Ross disappears from Elle Thomason's life, she is certain she'll never see the man she loves again—except in her dreams.

Ten years later, as a respected researcher breaking new ground in psychic phenomena, she sends a desperate call for Nick's help. One by one, her colleagues have started disappearing . . . and Elle knows she's next. An elite soldier, Nick never meant to hurt Elle, duty kept him away—and then she vanished. Now troubled by unusually vivid, disturbing dreams of Elle in danger, Nick will rescue the only woman he's ever wanted and bring her back with him to Haven. Though powerful men are after Elle and her special abilities, Nick will die before leaving her side again.

Lisa Marie Rice is one of my favorite erotic/romantic suspense authors, and I love this futuristic - but not overly SciFi-esque - world she's created. I've been so looking forward to this second installment of her Ghost Ops series, and like the first book, Heart of Danger, it's action packed, fast paced and sexy, but I have to be honest, it also dragged in places.

Approximately the first 30% of the story is devoted to to the backstory, and while that might seem like a bit much, there's a lot of important information here. Things we need to know and wouldn't be able to get any other way without going the flashback route, which I'm not a big fan of.

I truly enjoyed reading about Nick and Elle's history. They're both great people, each in their own right... but put them together and they're amazing. It was emotional, poignant, romantic, sexy...but there was more introspection and lamenting than I like. I found myself skipping paragraphs at a time to get to the actual dialog and 'the good stuff' - the rebuilding of their relationship, and the new information surrounding Dr. Lee and Arka Pharmaceuticals. It's such an intriguing plot that I just wanted to skip all the 'filler' and get back to Nick, Elle, the Ghost Ops team, and the rest of the residents of Haven.

I hope Ms. Rice writes fast because I'm anxious to find out what's going to happen next!

Note: Something I failed to mention but feel that I should is that there is a cliffhanger with this story, but NOT concerning the HEA of our hero and heroine. It's strictly plot related.

My thanks to Avon Books for providing me with a copy of this story in exchange of an honest review.

Posted by Blithely Bookish at 2:36 PM