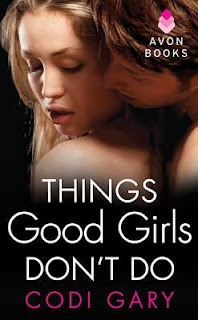 About THINGS GOOD GIRLS DON’T DO:

Good girls don't steal. Good girls don't visit sex shops. Good girls don't have one night stands. For Katie Conners, being a good girl just isn't worth it anymore. It used to mean getting the life you always wanted. But that was before she got dumped and her ex got engaged to his rebound. One evening, after a bad day and one too many mojitos, Katie starts making a list of things a girl like her would never do, not in a million years. As a tattoo artist with a monster motorcycle, Chase Trepasso isn't the kind of guy you bring home to Mom and Dad. And when he finds Katie's list in a bar, he's more than happy to help her check off a few items. Especially the ones on the naughtier side. Katie's more than tempted by Chase's offer, as long as they keep things uncomplicated. But as they spend more time together, Katie might just wind up breaking the most important rule of all: Good girls don't fall in love with bad boys

CODI GARY has been an obsessive book worm for twenty years and dreamed of writing romance since her first Sweet Valley High book. She writes best with a white mocha in one hand and the sound of female country singers in her ears. She lives in Idaho with her family.

The mojito had not improved Katie’s mood. She shoved another chili fry in her mouth and thought of how bleak her life looked. It wasn’t like Rock Canyon was swimming with eligible men who had a steady income and nice manners. Her mother had always put a lot of stock in a man with manners, and Jimmy had always been polite and friendly to her mother. She had never said an unkind word against him except that he was charming. Her mother’s tone had been less than complimentary when she’d said it and looking back, she had probably been trying to tell her something. Even Ted Bundy had been charming.
She doodled on her napkin, her thoughts dwelling on her mother. Her strong, capable mother, who had raised her by herself after her dad had left when she was two. As far as she knew, they had never divorced and her mother had never considered remarrying. She’d seemed fine alone, holding onto her manners and morals like a security blanket.
She wondered what her mother would say about everything that had been happening the last few years. When she’d lost her to breast cancer three years ago, Katie had felt broken and lost. Her mother had been her rock. Her cheerleader. Her conscience.
She wondered if her mother had ever gotten tired of being good, tired of doing the right thing. If Katie could do anything she wanted without repercussions…
She put the pen to her napkin and started making a list of the things she had always wanted to try or had always been told she shouldn’t do.
One. Get purple streaks in my hair.
When she was sixteen, she’d wanted to dye her hair purple. Her mother had told her no: that it was vulgar and a fad.
She bit the end of the pen and remembered the night after graduation, when she’d gone with all of her friends to Twin Falls and everyone had gotten a tattoo but her because she was terrified her mom would see it.
Two. Get a tattoo.
In ninth grade, when her friend Tammy Richards had stolen a pair of cheap sunglasses from Hall’s Market, and been caught, her mother had told her she couldn’t hang out with Tammy anymore. Katie had tried to explain that Tammy had only taken the glasses because she and Steph had dared her to, but her mother hadn’t relented.
Three. Steal something.
On and on the list went, her mother’s voice ringing in her head with “Ladies don’t do this” or “Good girls don’t do that.” She had to unfold the napkin just to make more room.
“You looked like you could use another.”
Katie’s head snapped up from her list and she covered the napkin quickly. “Hi Chase. What are you doing here?”
Stupid question. Why else did someone go to a bar? To drink.
He slid into the seat across from her and passed her the mojito. “Shop’s closed Mondays. Didn’t feel like hanging out at home.”
“Oh. Well, thanks for the drink, but I probably shouldn’t. Probably need to head out soon so I can get up early. You know what they say about worms and birds.” She could tell she sounded a like she was rambling, but she couldn’t help it. It happened when she got nervous.
“So, you have to be up early which begs the question... What brings you here?” He asked.
“I didn’t have any food in my house and didn’t feel like grocery shopping.” She tried to act casual, but the way his eyes kept shifting towards her hand was making her heart pound with anxiety.
“So you chose to come to a bar on a Monday night?” He said, his dark brow arched.
“They have great chili fries and I was in the mood for something greasy and really bad for me.” She said defensively.
He nodded toward her hand with a grin that was nothing short of evil. “What were you writing? You looked like you were thinking really hard.”
“Just my…to do list. I have a lot of things to do for the Extravaganza. I was trying to remember everything, but this mojito’s really getting to me. Besides, my handwriting is so messy, I can’t even read what I wrote anyway.” She swallowed and let out a nervous giggle.
“Huh. Well, if you’re feeling a little tipsy, I could finish writing it for you.”
She watched his hand creep towards her list and yelped in terror. “No thanks! I think I’ll just save it for tomorrow, you know, go after it with a clear head.”
She started to slide the napkin closer to her but quick as a snake, Chase pulled the napkin out from under her hand. Panic rose up, tightening her throat, and she cried hoarsely, “No!”
But Chase had already brought it under his nose and those teasing eyes shifted as he scanned the first line. “Number One. Get purple streaks in my hair.”
She wanted to die. She wanted to curl up in a ball and die a slow, horrible death. Grabbing her purse, she threw some bills down for Grant before bolting for the door. She couldn’t just sit there and listen to him read off each idiotic idea that had come into her head after one mojito.
Note to self. Next time you decide to make a crazy list of things you want to try someday, do it at home.

Chase was too startled by Katie’s abrupt departure to stop her. He hadn’t meant to upset her; he’d only been playing around.  He looked over the list again, and could see why she was so spooked. A surprised smile spread across his face as he read:
One. Get purple streaks in my hair.
Two. Get a tattoo.
Three. Steal something.
Four. Say the first thing that comes to mind.
Five. Go Skinny Dipping
Six. Go to a sex shop.
Seven. Try Handcuffs
Eight. Tell Jimmy exactly what I think of him.
Nine. Drink and flirt too much.
Ten. Have a one night stand.
Chase folded up the list and put it in his pocket. Who would have thought little Miss Play by the Rules would make such a naughty list?
Smiling as he left the bar, he decided that first thing tomorrow, he would call K.C.’s Salon and get an appointment with her. This was the perfect chance to satisfy his curiosity, and get over his crazy attraction to the uptight blond.
If the only way he could get her undivided attention, and pitch his master plan to help her complete any and all items on her list, was to get a thirty dollar haircut, then so be it. Besides, he couldn’t wait to see prim-and-proper Katie Conners get a little hot under her collar.

My Review of Things Good Girls Don't Do