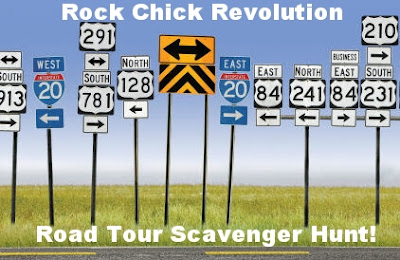 Welcome to my blog and my installment of the
Rock Chick Revolution Road Tour Scavenger Hunt!

Kristen Ashley and her invaluable Right Hand Woman, Chas, have put together some totally awesome prize packages for you! All you have to do is take a trip to each participating blog, gather the clues, answer the questions, and you're entered to win!  At the end of my review you'll find links to the schedule, all the blogs, and a link to where you go to answer the questions.

That's where you'll also find my clue and a link to the next blog on this Road Tour Scavenger Hunt!

Good Luck and ROCK ON! 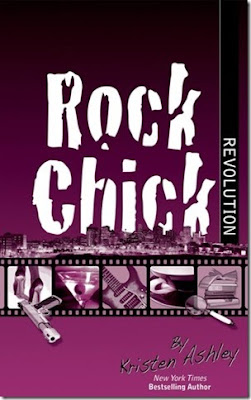 Ally Nightingale has secrets. Secrets she doesn't even share with the Rock Chicks. But two men know what she's up to. One has her back. The other has her heart, but he doesn't know it.

As Ally rewinds the last year of her life, she knows two things. One, she’s never going to get what every Rock Chick should have—her own Hot Bunch guy. And two, she’s a Nightingale through and through. She just isn’t sure what to do about that.

But as her secrets are revealed, the men in her life react. Darius Tucker, a lifelong friend, as usual takes her back. Ren Zano, the man she loves, isn’t quite so sure. The Rock Chicks, Hot Bunch and the entire gang at Fortnum’s weigh in, and a Rock Chick Revolution starts brewing.

It’s up to Ally to control it and prove what she knows down to her bones.

She’s a Rock Chick, she deserves her hot guy and she’s going to keep the one she wants…

Because she’s a Nightingale.

"Because, no matter how old we get, we always need to believe in fairytales."

I adore Kristen Ashley’s stories. They’re fun, sexy, heartfelt, thought provoking, and you can tell that they come from a place of truth. Each and every one has become a favorite, for different reasons. Some grab my heart because they’re poignant, others because they’re romantic. Some set my imagination free, while others ground me and make me feel solid. I love that regardless the tale she’s telling, she can pull me in, have me connect with the characters – who never feel like characters, by the way – and keep me turning the pages into the wee hours of the morning.

And such is the case with this story.

Rock Chick Revolution is the eighth and final book in Kristen Ashley’s totally awesome Rock Chick series, and the story most of us hard-core fans have been waiting for. From their first encounter in Rock Chick Revenge when Ally gets in Ren’s face to make him step back from the fight between he and Luke – over Ava, no less – you just know these two will end up together and that they’ll push at each other, pull at each other, drive each other insane and burn up the sheets together. And man, oh, man, do they ever!

“Revolution” in the title is very apt, for a couple of reasons. One being that the story of the Rock Chicks and the Hot Bunch has come full circle. But while reading this story I couldn’t help but connect that word to what was happening in the Rock Chick world – a revolution of sorts. I’ve always seen Ally as a wild card. The one you could never totally read. Like the rest of the Rock Chicks, she’s a girl who knows what she wants and will stop at nothing to get it. That said, what Ally wants is HUGE and is going to upset the Hot Bunch apple cart in a big way, and cause a revolution of epic proportions. And that’s all I’ll say about that.

There are some very cool twists. Some totally awesome turns. Things you may have never seen coming, but when they come, you can’t help but smile, and I mean smile in a way that comes from deep inside, from another place of truth. "Because, no matter how old we get, we always need to believe in fairytales."

Oh, and one last thing - you know that saying, when one door closes, another opens, so an ending is just a beginning? Yeah. That.

And now for the good stuff!!!

Rock Chick Groupies
An e-copy of Rock Chick Revolution for you or a friend.

You'll find this place skirting an off-road on I-25


Now be sure and head over to All Romance Reviews for another of today's clues and a link to the next stop on this RIGHTEOUS Road Tour!!

Important! In case you get lost, these links will help you find your way...