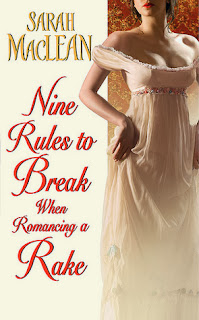 Lady Calpurnia Hartwell has always followed the rules, rules that have left her unmarried—and more than a little unsatisfied. And so she's vowed to break the rules and live the life of pleasure she's been missing.

But to dance every dance, to steal a midnight kiss—to do those things, Callie will need a willing partner. Someone who knows everything about rule-breaking. Someone like Gabriel St. John, the Marquess of Ralston—charming and devastatingly handsome, his wicked reputation matched only by his sinful smile.

If she's not careful, she'll break the most important rule of all—the one that says that pleasure-seekers should never fall hopelessly, desperately in love.

Why am I posting this review again?

I've been asked by the lovely Jessie Edwards, one of the fabulous ladies in charge of the Avon Addicts program, to choose my favorite Avon romance. Is she kidding?? She must be joking! Just one???

Anyway, to refresh my memory, I reread a few of my old Avon reviews and I've decided to repost this review in hopes that anyone not familiar with the Love by Numbers series will give it a go. Yes, it's that good.

So, my favorite Avon romance...

Well, there are a few books that instantly came to mind - Again the Magic with the physically and emotionally scarred Aline, and John, the man who loved her, by Lisa Kleypas; Whisper Falls starring good girl Tessa who falls for the bad, bad boy, Lucky Romo, by Toni Blake; Flowers from the Storm with Christian, one of the most tormented heroes I've read, and Maddy, the woman who saves him - and he saves her right back, by Laura Kinsale (review links can be found below); and this one... Nine Rules to Break When Romancing a Rake by Sarah MacLean. Well... I've picked Nine Rules, and here's why...

It's because if I could choose to be any heroine from a historical romance, I'd want to be Lady Calpurnia Hartwell, and here's why...

I find I’m at a loss for words when trying to describe the wide range of emotions this book evoked in me, except to say that it made me laugh, cry, sigh, gasp, and hope for a happily ever after for the hero and heroine more than I have in any other book I’ve read in a very long time. And, this is the first book in which I’ve found myself more invested in the heroine’s happiness than the hero’s.

The prologue had my heart breaking for a young woman’s shattered – albeit it brief – fairytale fantasy, and her so very low self esteem. But that said, this is one of those books that made me wish that I were the heroine. Not just so I could live happily ever after, but for the kind of person she was. I loved her for her goodness, her kindness and compassion. I adored her for her sense of humor, her generosity and her selflessness, but most of all; it was her strength, her courage to live, rather than sit on-the-shelf collecting dust as society dictated that all "self respecting" spinsters should. It’s for all of these reasons that I wish I were Callie.

It took me awhile to fall in love with Gabriel St. John, Marquess of Ralston, but it did happen. I mean, how could it not? Take a gander at that step back… again, I ask... How could I not fall for him?? The look on his face speaks volumes as to his passionate nature, his need… his hunger for this unusual woman who was nothing like society expected her to be. She was daring, witty, refined, and intelligent and she’d managed to work her way under his skin, and before he knew what happened, into his heart. His reputation was no secret - he was known by all as a rake and a libertine, so when he became aware of her plan to experience the same kinds of things that gentlemen are allowed to experience, I wasn’t terribly surprised when he offered to facilitate her in her quest to check each item off of her list, whilst risking utter ruination!

I’m always impressed by other readers who include quotes in their reviews. Me? I’m too engrossed in the book to make myself stop long enough to make notes, but this book demanded that I do exactly that — twice. This first quote I’ll share is from the prologue and had me sobbing. My ever faithful Goodreads friends, Catherine and Rane, were there to help me through this tear-jerking scene as I posted it on my status update:

She pushed aside a devastating pang of sorrow as the truth coursed through her. She would never have the magnificent Marquess of Ralston, nor anyone like him. She felt an acute certainty that the things he had said to her earlier were not the truth but instead the lies of an inveterate seducer carefully chosen to appease her and send her blithely off, easing his dark tryst with his ravishing beauty. He hadn't believed a word of it. No, she was not Calpurnia, Empress of Rome. She was plain old Callie. And she always would be.

Seriously, when read in context, with the entire prologue, that was one of those most heartbreaking moments from any book I can recall.

Now, the second quote/snippet I have for you is the moment in which I finally became invested in seeing Callie and Gabriel’s happily ever after come to pass, and knowing I could believe in it.

This is yet another gut wrenching scene and takes place when Callie finds out about a wager that had been placed between Gabriel, and Oxford as to whether or not Oxford would be able to convince Callie to marry him Of course, this is a romance novel so we, the readers,  already know who’s going to end up the winner, but when Callie gets wind of it, she’s humiliated and thinks she’s nothing more than something for men to wager over. Gabriel had proposed to her and she’d accepted, but now, even though the bet was for 2,000£, she suddenly felt so very worthless. So she has demanded that Gabriel stay away from her, and she’s fled the ball where this scene takes place. Oxford, well into his cups, has some unflattering things to say about Callie in front of Gabriel and Benedick, Callie’s brother:

“Certainly, the best thing about spinsters is that they’re eager for a toss, but you can’t really mean to tell me you need to resort to one as plain and uninspiring as that one. Although, it did appear she was more than willing to lift her skirts for you…and I suppose that is something.”

Benedick stiffened, and fury, hot and quick, coursed through Ralston at the words, so demeaning and unpleasant, directed at the woman he planned to make his wife. Because there was absolutely no question that Callie was going to be his wife.

Drunk or no, Oxford would pay for his words.

Reaching out, Ralston grabbed Oxford by the lapels of his topcoat and slammed him against the stone wall that marked one edge of the balcony. The force of the blow took the breath out of the baron, and, gasping for air, he slumped to the ground, clutching his chest.

Ralston looked down his long, elegant nose at the vile creature at his feet and said, “You just impugned the honor of my future marchioness. Choose your seconds. I will see you at dawn.”

Leaving Oxford sputtering on the ground, Ralston spun on one elegant heel to face Benedick. “When I am done with him, I am coming for your sister. And, if you intend to keep me from her, you had better have an army at your side.”

So, Gabriel had been slowly working his way into my heart, but it was his actions and his words in defense of Callie that sealed the deal for me.

The bottom line – this was my first Sarah MacLean read and it most assuredly will not be my last. I’m anxiously awaiting the October 26th release of the second book in this series, Ten Ways to Be Adored When Landing a Lord. It’s Gabriel’s brother, Nicholas St. John’s story, and will undoubtedly be every bit as wonderful as this book was.

So tell me, what's YOUR favorite AVON romance?  Have you read any of my top 4??

If you're interested in finding out why I loved the other books so much, here are my reviews:

My Review of Again the Magic

My Review of Whisper Falls

My Review of Flowers from the Storm