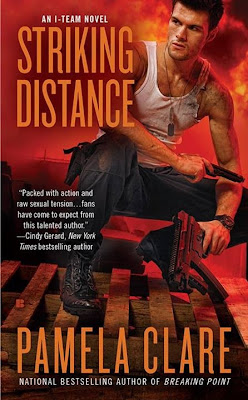 Her past is a secret—even to her.

Discovering it will be the most dangerous move of her life.
TV reporter Laura Nilsson, known as the "Baghdad Babe," spent eighteen months in an Al Qaeda compound after being kidnapped live on the air. Two years later, she's still wondering why.
No rescue mission in Javier Corbray's fourteen years as a Navy SEAL affected him the way Laura's rescue did. No woman has stirred his protective instincts the way she has. And he wants her more than he's ever wanted anyone.
As Laura and Javier's passion ignites, so does Laura's need to discover the mystery of her past. Especially when she learns that her abduction was not random—and that she's still a target for a killer with an impenetrable motive. Now Javier will have to rely on his skills to keep the woman he loves from being struck down before she dares uncover the truth.

Note: This review is based on the story I read as a WIP (Work in Progress), and as brilliant authors often do, there may have been changes made to the final copy.

Striking Distance is the sixth book in Pamela Clare’s I-Team series, and just like the five books before it, it’s amazing! It’s fast paced, exciting, heartbreaking, inspiring, romantic, sensuous… it’s everything we’ve come to expect from this amazing author!

This story deals with some difficult subject matters, including the heartbreaking aftermath of rape. The cover blurb alone tells us that this will be an emotional ride, but let me tell you… what Laura endured in captivity was hell. Even after being freed she continues to live that hell, and trying to put the pieces of her life back together and move on... well, I can imagine many women would just curl up and give up, but not Laura. She’s strong, she’s intelligent, she’s compassionate… she's truly a wonderful woman.

Javier Corbray is an amazing man. Of course he's sexy as all get out, but he's also protective, compassionate, honorable, devoted... he's all kinds of awesome! He understands all that Laura has been through and does whatever he can to make her life easier and to keep her safe. Laura has much to overcome, but with Javier on her side, anything and everything is possible.

One of the most compelling things about Pamela's stories is how she uses events or practices that really do happen, educating us to the world around us and doing it in a way that's entertaining. Don't misunderstand - I'm not saying there's anything enjoyable about drug rings, human trafficking, heinous acts in prisons, or setting women on fire... I mean that these are things we all should know about, but probably don't. Pamela gives this to us, making us aware of what's happening, but doing so in a 'first hand' way, through her characters' eyes, and giving us hope in the knowledge that there are people out there who are working to make a difference. To make things better. And who knows? Maybe we can find a way to help, too.

In case you aren’t already aware, Pamela Clare has given us a prequel novella, First Strike, which is Javi and Laura’s first meeting in Dubai, and the super sexy weekend they spent together. If you’re interested, you can read all about why this scene was cut, and how it came to be a novella, in My Spoiler Free Review of First Strike. As always, Pamela makes sure that, one way or another, her readers get her stories, told the way she wants them told - in their entirety!

Well, I best stop now before I start rambling - more than I already am. There's so much to say but all you need to know is that Striking Distance is a riveting, poignant story. Javi and Laura are a worthy addition to the other I-Team happily ever afters, and I can't ask for more than that!