How to Marry a Highlander by Katharine Ashe 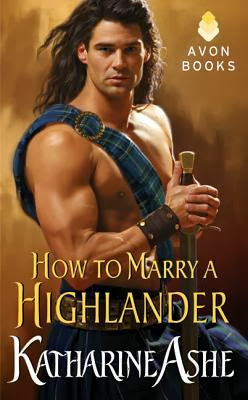 Teresa doesn't want to marry the vicar, so she takes husband hunting into her own hands. Her sight is set on Duncan, Earl of Eads, a man she only saw once from across a ballroom eighteen months earlier. Even though he's practically penniless, there's something about him compels her to seek him out and make him an offer of marriage he can't refuse. Except, much to Teresa's dismay,  refuse is exactly what he does! Not easily dissuaded, Teresa proposes a wager; she'll find husbands for five of the Earl's step-sisters within a month's time, with a token to be paid upon each successful betrothal - a kiss for one, an inappropriate grope for another, and so on until marriage, or at the very least, bedding, will be her reward!

This is such a fun story, and fans of historical romances starring swoon-worthy Scots will love How to Marry a Highlander! Witty, romantic, sexy, and clever, it's one of the few novellas that is so good, has such great characters and plot, that the only way to make it better would have been to make it longer.

For those wondering, yes, this works very well as a standalone, though Duncan and Teresa were first introduced in How a Lady Weds a Rogue, book three in this series. Katharine Ashe is a talented writer and I'm excited to read more of the Falcon Club.

My thanks to Avon books and Edelweiss for providing a copy of this story in exchange for an honest review. It was a pleasure!